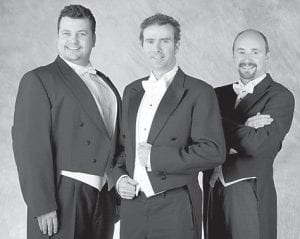 A program of Irish music is on tap when the Three Irish Tenors visit Big Stone Gap, Va., for “Christmas From Dublin,” Monday, Dec. 1 at 7:30 p.m.

It will be held in the Goodloe Center of Phillips- Taylor Hall at Mountain Empire Community College. Admission is $12 adults, $8 seniors and $6 students.

In addition to Irish favorites, the group will feature songs of the season such as “Little Drummer Boy,” “Silent Night,” “Saviour’s Day” and “O Holy Night.”

Dublin native Ciaran Nagle had his first leading role at age 12 but didn’t begin voice training until a few years later. He studied at the College of Music Dublin for nine years. He has performed with the National Chamber Choir and has sung in Carnegie Hall under the baton of Robert Shaw.

P.J. Hurley, County Clareborn tenor, made his New York debut in Carnegie Hall and his operatic debut in the lead role of Rodolfo in Puccini’s La Boheme. He has garnered numerous awards in vocal competitions and performs with RTE radio and television.

Kenneth O’Regan, from Ireland’s southernmost city of Cork, has traveled the world with Riverdance and is widely regarded as one of the most dynamic vocalists in Irish musical theatre.

Soprano Jacqueline Whelan started singing at age 15 and studied at the Municipal College of Music. She has had leading roles in many productions, and holds a teaching diploma from the Royal Academy of Music. Whelan is touring the U.S. as guest soprano with the Three Irish Tenors.

David Wray is the musical director and Bob Durkin is production supervisor.

For information and assistance for persons with special needs, call (276) 376-4520 or visit Pro-Art’s website at www.pro-art-va.org.