Three or more embryos no better than two when treating infertility 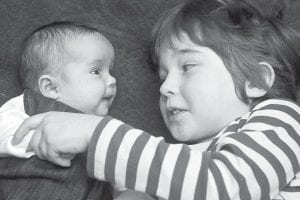 Twins Reuben Blake, five-years-old, and his twin Floren, seven-weeks-old, were conceived from the same batch of embryos but born five years apart in Cheltenham, England. (AP)

A new study of fertility treatment found that women who get three or more embryos have no better odds of having a baby than those who get just two embryos.

They also have a greater chance of risky multiple births.

“Women who have gone through infertility treatment want the best chance of having a baby, but we need to explain that the data shows transferring more embryos doesn’t actually do that,” said Dr. Scott Nelson, head of reproductive and maternal medicine at the University of Glasgow, who co-authored the new study published in the Lancet.

In Western Europe, where some countries pay for in-vitro fertilization, or IVF, many authorities recommend a single embryo transfer for women under 37 and a maximum of two embryos for women 37 to 40. For women over 40, three is often the limit by law.

In the United States, there are relatively lax guidelines and a lack of regulation. The U.S. has seen a rise in multiple births, including the highly publicized case of Nadya Suleman, labeled the “octomom.” She had octuplets in 2009 after her doctor transferred 12 embryos. She already had six children through IVF.

Most fertility treatment in the U.S. is paid for privately and can cost at least $10,000 per cycle, which experts believe encourages the use of more embryos in the belief it will improve odds.

The American Society for Reproductive Medicine recommends single embryo transfers for women under 35, but there is no enforcement of that. For women 35 to 37, they advise two to three embryos, and three to four embryos for women ages 38 to 40.

In their study, Nelson and Debbie Lawlor, of the University of Bristol, analyzed data for all 124,000 IVF cycles in the U.K. between 2003 and 2007, resulting in more than 33,500 live births. The women were 18 to 50 and had varying histories of infertility. During IVF, eggs are fertilized with sperm in a lab dish and then put in the womb.

For women under 40 who had two embryos transferred, the live birth rate was 33 percent overall. With three embryos, that dropped to 25 percent, though researchers weren’t sure why. Nelson said it might be due to the higher risk of miscarriage in a multiple pregnancy and that miscarrying one fetus would jeopardize the entire pregnancy.

For women over 40, the live birth rate was 13 percent whether they had two or three embryos transferred.

Nelson said patients going through IVF may pressure doctors to transfer more embryos, believing it may boost their chances of having a baby and avoiding more treatment.

“Doctors may feel if they don’t do what their patients want, they’ll just go down the street to another clinic,” he said. “They need legislation to help control the situation.”

The U. K. has tougher policies. Transferring three embryos in women under 40 is banned. And if doctors transfer more than three embryos, they must explain their actions to the fertility regulator. In 2010, about 65 percent of embryo transfers involved two embryos and 4 percent used three. The rest were single embryos.

In the U.S., data from 2009 showed about 52 percent of embryo transfers involved two while 23 percent used three embryos. Nearly 12 percent involved four to seven or more embryos. Only about 14 percent used one.

Multiple births have a higher risk of problems, including an increased chance of miscarriage and pregnancy complications like high blood pressure and diabetes. Twins and triplets are more likely to be premature and have an increased risk of developmental problems such as cerebral palsy.

Dr. James Grifo, director of the New York University Fertility Center, agreed doctors should avoid using more than three embryos. But he said it was warranted for some, such as older women with a history of failed treatment.

Grifo said the fact many Americans pay for their treatment out of pocket makes a big difference. “I spend a lot of time trying to talk patients out of the three-embryo transfer and you can’t always do it,” he said.

“My last set of triplets was a patient who demanded I put back three embryos,” he said.

Grifo said she wasn’t swayed by the data. “She delivered the triplets and they’re fine, but I wasn’t happy about it.”