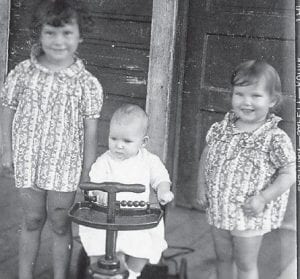 MARLOWE KIDS — Pictured are Lucille, Kathleen, and John Jr., the children of the late John and Mae Stidham of Marlowe.

We’ve lost another one of our Marlowe people, Glenn Adams, son of the late Ellis and Margie (Pennington) Adams. His funeral was on Friday. I was there on Thursday night. There was a good crowd there. Dan Combs was there and also Linda (King) Polly and her husband Rickey, Glen and Fern Brown, and the Pennington sisters, Dorthy Tackett, Pearl Noble and daughter Teresa Pease, and Linda Hall, and lots of nieces and nephews of Glen. I enjoyed talking with Joe Adams, son of the William Adams and the late Vicella Adams. I didn’t get to see him. I didn’t get to see him but I’m sure he was there. He and his brother Glen were Clyde’s hunting buddies.

Dorthy called to tell me she and her sisters, Pearl Noble and her two daughters Teresa and Jennifer and Linda Hall, and Dorthy’s daughters Jeanette Yonts and Charlene Mason and husband Rickey had been to Cleveland, Ohio, to visit two churches where Master’s Harmony was singing. She said they had a wonderful time. The members of Master’s Harmony are certainly wonderful singers. When they returned home they heard of their nephew Glenn Adams dying. They are all a close family. Our sympathy goes out to all of them. 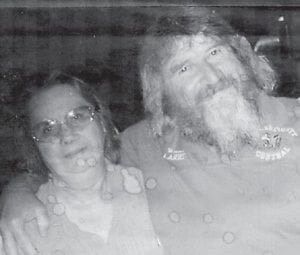 While they were in Ohio, they got to see Ronnie Dale Pennington, son of their brother, the late Murphy Pennington. They also visited with their brother Hugh Pennington and Mary and her husband.

Claudie Banks of Isom called me to tell me to tell the lady who was trying to locate her mother grave that she knows where it is. It’s behind the Isom Presbyterian Church close to Herman Combs’s grave. It’s with some more unmarked graves. They are probable those of the twin babies the woman inquired about. She can write to Claudia Banks, 418 Highway 7, Isom, Ky. or call her at (606) 633-9958. She’s the sister of Steve Adams that I’ve always called “the quiet man.” He went to Marlowe School and graduated with my sister Kathleen (Howard) Brock. He’s not a quiet man. He’s like me, he loves to talk to his friends. 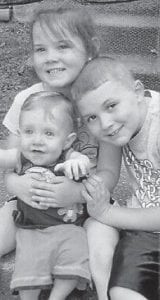 ABBY AND LUKE HOWARD, children of Terry and Tracie Howard, are pictured with one-year-old Caine Reynolds, son of Destini and Jeff Reynolds, grandson of Jim and Shannon Banks, and great-grandson of Louise Shepherd and the late Castel Shepherd.

I got in a cooking mood Friday and called my brother Charles Howard and his wife Brenda to come eat with me. All the rest of my family were gone or working. I sure enjoyed have them. I love my family!

Destini (Banks) Reynolds’s little son Caine celebrated his first birthday. He is so cute! He’s Jim and Shannon Banks’s grandson, and Louise Shepherd and the late Castle Shepherd’s great-grandson. I don’t know the name of the other grandparents.

Jim Cornett of Burnside sent me a picture of the late John and Rose May Stidham’s children. Most of you will remember the late Lucille (Stidham) Holbrook from Whitesburg Hospital. She worked there a long time. Jim, you thought the baby was George; it was his younger brother Jr. George was older than the others. He was my age and the girls were younger than him. I have the picture you have of the Tom Thumb wedding. I put it in the paper some time back and asked you if your wife Janice knew about this early marriage at six years old. I appreciated the other pictures. I didn’t know Polly Brown’s child. Do you know who it is? Is the other picture of Earl Adams the Earl Adams that was married to Viola “Buggy” Sexton? I appreciate folks sending me their pictures.

ADAMS FAMILY — Pictured are the wife and children of the late Earl Adams of Isom.

I enjoyed my trip to Hazard on Thursday with my good friend Shirley Breeding. We have a good time being together. She is a special person. We visited Cleo Prichard, who is a resident at the Veterans Center. It was good seeing his wife Barbara and her sister Kathy Napier. We also visited Worley Back, who was a friend of Shirley’s late husband James Breeding.

You meet a lot of friends there and make a lot of new ones. They get good care there. The workers are so nice and friendly.

I’ve got to remind you again of the Howard family reunion on Sept. 26 at Carr Creek Lake. My friend Roberta Willie is going to try and come to Mountain Heritage that week and try to be at our reunion. Bring your brother Roland Brown and wife Ruth with you. We would all like to see you.

My sons Rob and Bill and Sandra and Joe enjoyed our Wednesday trip to Pine Mountain Grill. I didn’t see many of the ones we usually see there. We did see Irene and Billy K. Banks and their family there. I don’t know if it was an occasion or just being together. I enjoyed talking to Irene. I hadn’t seen her in a long time. I saw Van Webb there. His wife Betty was to have surgery the next day. I heard it went well, that’s good.

We have some birthdays coming up in August. My son Billy’s is on the 19th, and so is our cousin Elzie Ray Hatton’s the same day and my granddaughter Rocki (Hatton) Hill’s is on the 28th.

Rob had his son Dr. Kevin Hatton and wife Adrienne and their two little boys Will and Loren visiting last week. He sure enjoyed that.

Louise Shepherd’s son Jerry and his daughter Lindsey have been visiting her. She said their visit was just too short. It usually is for all of us. We hate to see them leave.

It’s getting late so I’ll say goodnight and God bless you. Talk to you again next week.

Try to go to church somewhere this week.