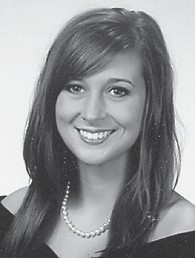 Lewis, the daughter of Robert and Patricia Lewis of Whitesburg, was graduated from Letcher County Central High School in 2008, eighth in her class with a 3.79 grade point average. While attending high school, she was a member of the Beta Club, Drama Club, Inter-Act Club, and About Face Youth Ministries, and was a PSI Teen-leader, a cheerleader, editor-in-chief of the yearbook, and student government secretary.

She is a senior at Transylvania University in Lexington, and is a member and recruitment chair of Chi Omega Sorority, and a member of Phi De Premed Fraternity and the Biology Club.

She considers herself to be very focused, driven, motivated and competitive, which has helped her to challenge herself and succeed academically. She is majoring in biology at Transylvania, and will be graduated with a bachelor’s degree in May. She plans to enter a four-year medical program at Pikeville University to begin graduate work to become a pediatrician. 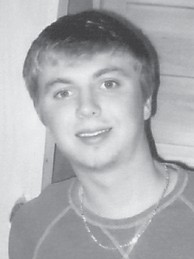 She says she loves the community where she grew up because of its close-knit atmosphere and because everyone is caring and sincere. When her education is complete, she says she plans to return to eastern Kentucky to work and live so she can contribute to the area that she loves so much and provide health care to the children of the area.

Proffitt is the son of Barry and Stephanie Proffitt of Isom, and was graduated from LCCHS first in his class with a 4.5 gpa. In addition to being the valedictorian of his class, he was captain of the basketball team, playing all four years, and was tennis team captain and a member of the PRIDE Club. His basketball team was district champion when he was a senior, and he played in All-District and All- Region games.

He is a junior at Alice Lloyd College, where he has been named to the Dean’s Distinguished List and recognized as one of the top 40 ALC students. He has also been named to Who’s Who Among Students in American University and Colleges. After earning his bachelor’s degree, he plans to attend the University of Kentucky College of Medicine to become a doctor. 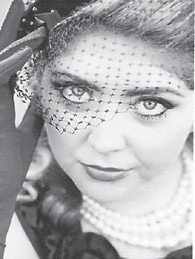 He says he is a hard worker and is always dedicated to the task at hand. He pushes himself to succeed, he says, loves his community where everyone seems to care about each other and would like to return to eastern Kentucky to provide health care for his neighbors and friends.

Riffe, the daughter of Christopher and Celesta Riffe of Thornton, was graduated from Letcher County Central High School in May in the top 10 percent of her class with a 4.172 gpa and earned a Commonwealth Diploma.

She says she loves being involved in her community and has been a volunteer in Appalachian Ministries, All I Want for Christmas is a Cure for Cancer, Page for Patriots, Thanksgiving food drive, Will You Be my Valentine (making and distributing Valentine’s Day cards for a nursing home), RAM Free Clinic, and annual clothing giveaway.

She is also a mentor for the Letcher County Health Department and counsels middle school students to postpone sexual involvement, and is a day care employee for Appalachian Childcare.

She attends the University of the Cumberlands where she is a sophomore because of completing college courses in high school. She is a member of the Baptist Campus Ministries and is second floor head representative of the Gillespie Hall House Council.

She says she is driven, dedicated and passionate, and is determined to achieve the goal she has set of becoming a physician’s assistant in orthopedics. She is majoring in biology and plans to attend a graduate program and then return to eastern Kentucky to provide health care to her community. She says her greatest desire is to return to this area to begin her career because it will help others. She can think of no better place to live, she says, and wants to rear her own family in this “never meet a stranger” environment.

These scholarships are given each semester by Elkhorn- Hazard Coal Land, LLC, in memory of both Roy R. Crawford Sr. and Roy R. Crawford Jr., who were both engineers and coal mine operators beginning with the founding of R. R. Crawford Engineering in 1925. Applicants must be residents of Letcher County and plan to live and work in eastern Kentucky upon graduation. Preference is given to applicants majoring in a field that will be beneficial to the coal industry, but all applications are welcome. Selections are based on academic achievement, personal character, and need.