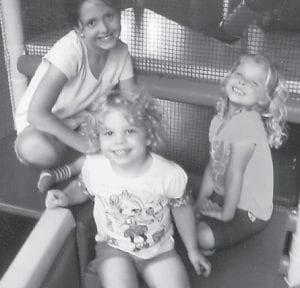 These three sisters are pictured having fun at the Letcher County Recreation Center. Toni Adams, Tori Howard and Taylor Howard are the daughters of Scott Howard and Nikki Howard of Isom, and Jonathon Begley of Goldsboro, N.C. Their grandparents are Mark and Nancy Adams of Isom, Scott and Susie Howard of Roxana, Leonard and Gwen Begley of Camp Branch, Margret Stidham of Linefork, and Barbara Bennett of Goldsboro, N.C. Their great-grandparents are Charlene Adams of Jacksboro, Tenn., the late Larry Adams of Isom, the late Corene Miles of Whitesburg, and Imogene Howard of Johnson City, Tenn. They are the great-greatgrandchildren of Viola “Buggie” Adams of Isom and the late Earl Adams, and the late Barbara Napier and Peanut Napier of Marlowe.