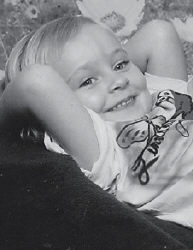 THREE YEARS OLD – Lindsay Jane Baker turned three years old August 13. She is the daughter of Wendell and Loretta Baker of Millstone. Her grandparents are Charles Ballou of Kona and the late Linda Ballou, and Edith Baker of Millstone and the late James Baker. She has two sisters, Santana and Brianne Baker of Chatsworth, Ga. She celebrated her birthday with a Scooby Doo party with friends and family.