Thunder beneath the mountains 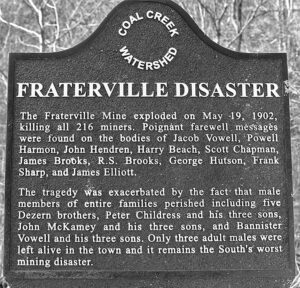 This historical marker is at the site of the 1902 mine explosion that killed 216 men and boys.

The horrible methane gas explosions in mines too numerous to cite individually, were a constant threat in the early years of coal mining.

One such explosion in Scofield, Utah, on May 1, 1900, resulted in the deaths of 200 miners. Across the nation, pockets of methane gas and coal dust ignited in various ways claimed the lives of thousands of miners. Sparks from the wheels of underground transportation systems or from the moving parts of mining equipment resulted in many such explosions.

Surprisingly lightning also caused an alarming number of calamities in the 1800’s and early 1900’s. At times lightning would strike the rails of the mine cars outside the mines and run along the rails deep into the mines where it would ignite pockets of methane and coal dust. Miners knew better, but there were still too many mine explosions causing loss of life due to men smoking in the mines.

A scant 10 years following the Coal Creek War that we visited a couple of weeks ago, many of the workers unknowingly were about to meet their doom. Some of the men who fought against the use of convicts in coal mines were now working in area mining operations including the mine at Fraterville, Tennessee located 46 miles north of Knoxville.

Two hundred and sixteen men and boys entered the Fraterville coal mine on May 19, 1902, with their picks and shovels. It was the era before modern mining machinery. Nothing was expected out of the ordinary on that day in May, just the regular 10 hours of work for 50 cents an hour. That seems low, but a loaf of bread cost just 7 cents. a dozen eggs 34 cents. a quart of milk 9 cents and a pound of steak was 26 cents.

The Coal Creek Coal Company began operation of the Fraterville Mine in 1870 and had the reputation of fair pay and adherence to the highest safety standards of the day. Their practice was to pay employees in cash instead of with scrip as done by most mining companies. This was one factor that helped in avoiding labor unrest that plagued many mining companies.

On this 19th day of May in 1902, a terrific blast sent a frightening roar, a great thunder beneath the mountain, reverberating through the mine and for miles around.

The exact cause of the explosion was never fully determined but likely was caused by leaking methane gas from an adjacent unventilated mine. On the previous Saturday there was an accidental breakthrough into a parallel, deserted mine shaft, resulting in gas entering the Fraterville mine. The explosion occurred shortly after the workday began on Monday morning, ignited by the open flame of the oil lamps worn by the miners.

The blast, louder than any thunder, occurred at 7:30 a.m. Many of the miners were killed outright. Some survived the initial blast and were forced to seek refuge from the deadly, smothering, smoke and deadly gases. They did their best to barricade themselves in a section away from the main passage. They hoped to live long enough for any rescue party to reach them but hour after hour came and went without help. It was reported to be the worst mining disaster in Tennessee history.

The men knew they could succumb at any time to the gases. If they survived the gas, they would soon run out of air. They talked about their families and their religion. One’s Saviour comes to the forefront in a man’s thinking in times of approaching grave danger or death.

“Oh God, for one more breath,” Jacob Vowell included in a note to his wife Ellen as his time was rapidly running out.

Vowell’s 14-year-old son Elbert was a child but he was also a miner. Elbert was trapped in an area along with his dad and about two dozen other miners. Their air supply continued to dwindle and as their time was running out, they thought about dying.

“Ellen, we are shut up in the head of the entry with little good air left. The bad air is closing in fast. I have to leave you in bad condition but, dear wife, put your trust in the Lord to help you raise my little children. Ellen, take care of my little darling Lillie.

“Ellen, little Elbert said he has trusted in the Lord. Charles Wood says he is saved and if he never lives to see the outside again, he would meet his mother in Heaven.

“We are not hurt bad but we are dying because our air is running out. I want you to live right and come to heaven,” Vowell etched on paper he normally used to keep track of the coal he dug each day. “Raise the children the best you can. Oh, how I wish to be with you! Goodbye to all of you. Goodbye.”

Jadon Gibson is a freelance writer from Harrogate, Tennessee. His writings are both historical and nostalgic in nature. He wishes to thank Lincoln Memorial University, Alice Lloyd College and the Museum of Appalachia for their assistance.