TIA events launch search for the cause 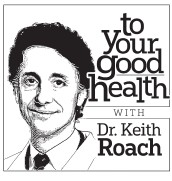 DEAR DR. ROACH: In the past six weeks, I have had five TIA events, ranging from a minute or so to six minutes. My symptoms are: a loss of control of my right leg, moving up to my right arm and fingers; and a loss of speech. I am aware and thinking during these episodes, although a little disoriented.

I was hospitalized after the last one and was given a CT scan, an MRI and many blood tests: All were “normal” for my age (which is 68). A vascular check was done, as my BP was different when taken in both arms, and they say that was normal also. A 24-hour heart monitor is yet to be read.

My doctor put me on Aggrenox 25/200. My mom had a stroke at 42 and passed away at 49, diagnosed as a thrombosis to her heart. What is the next step? I am so anxious all the time, waiting for something to happen. — L.C.

ANSWER: “TIA” stands for “transient ischemic attack.” It has the symptoms of a stroke, but by definition lasts less than 24 hours. The symptoms you are describing are in the distribution of the middle cerebral artery in the left hemisphere of the brain. This could be caused by a blockage in the artery or, less likely, by an embolism (a small blood clot or cholesterol going to that part of the brain).

Your doctor has done a lot of things right, as best I can tell. The MRI scan you had also might have included an MRA (magnetic resonance angiography), which is a special form of MRI that looks specifically at the blood vessel. I am not sure about the vascular check you had, but I would suspect it might have been an echocardiogram, especially one that looks at the aortic arch, where emboli sometimes form, as well as a look at the blood vessels in the neck with a Doppler ultrasound. An echo done through the esophagus may be better at spotting problems than one done through the chest.

Finally, something that’s easy for me to say but hard to do: relax. Being anxious all the time isn’t good for you. It sounds like your doctor is doing the right things and that you are on a good medication to prevent further problems.

DEAR DR. ROACH: I need some medications, like Dulcolax and Miralax, for some tests. The generics are so much cheaper. Is there much difference, compared with the expensive brand? — J.M.

ANSWER: In my experience, there is almost no difference between the brand name and the generic for prescription and most overthe counter medicines. The quantity and quality of the active ingredient is regulated. The inactive ingredients occasionally may cause a reaction in a sensitive person. Most physicians, including myself, use generic brands for themselves and their families.

Dr. Roach regrets that he is unable to answer individual letters, but will incorporate them in the column whenever possible. Readers may email questions to ToYourGoodHealth@med. cornell.edu. To view and order health pamphlets, visit www.rbmamall.com, or write to P.O. Box 536475, Orlando, FL 32853-6475.