Tichina Arnold finds a new sitcom home in ‘The Neighborhood’ 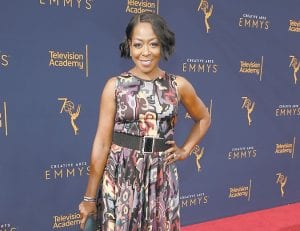 Tichina Arnold stars in the comedy series “The Neighborhood.” (AP)

Tichina Arnold knew as a tot she was meant to perform.

She’s been honing her talent since, but credits more than that for a career that’s paired her with comedy stars Martin Lawrence, Chris Rock and in her latest project Cedric the Entertainer for CBS’ “The Neighborhood” (airing 8 p.m. EST Monday).

Listen to the comedic actress explain and it’s apparent she could moonlight as a life counselor.

Arnold started her professional career at age 11, appearing first at the Public Theater in New York City, then in regional productions and, in her first movie role, in 1986’s “Little Shop of Horrors.” She played Crystal, a member of the combo Greek chorus-backup trio that included Michelle Weeks and Tisha Campbell.

During a year of filming in London, during which she turned 16, she and Campbell made a splash off the set.

“Tisha and I would go to Hyde Park and make up dance routines, kind of pretending we were in Central Park. A crowd would gather around, and we brought a little bit of New York to London,” Arnold said.

She’s worked in film — she has three indie movies awaiting release, including “The Last Black Man in San Francisco” — and more steadily on TV, moving from daytime serials “Ryan’s Hope” and “All My Children” to prime-time series including “Martin” with Lawrence; “One on One”; the Chris Rock-produced “Everybody Hates Chris,” with Crews and Tequan Richmond; and “Survivor’s Remorse.”

The cast of “Martin” made work fun, Arnold said.

“If you listen to the laugh track, you can hear us laughing at each other because we would watch each other’s scenes all the time,” she said.

In the freshman comedy “The Neighborhood,” Arnold plays Tina, the wife and foil to Cedric the Entertainer’s Calvin, who is appalled by the prospect of gentrification when a white family (Max Greenfield, Beth Behrs, young actor Hank Greenspan) moves into his African-American neighborhood. Sheaun McKinney and Marcel Spears co-star.

His TV wife makes her character authentic and funny, said Cedric the Entertainer. “She just brings that perfect balance to ‘The Neighborhood.’ You believe it,” he said.

Arnold, 49, born in Queens, New York, said she drew on her own mom’s example in creating the warm but forthright Tina.

Diane Arnold is “no-nonsense, with a different way of mothering,” the actress said. She recalled taking part in a mediocre play at age 16, with most parents heaping excited, debut-night praise on their kids. Her mother’s reaction: “We’ve got to get you out of this show.”

“The Neighborhood” was created by executive producer Jim Reynolds (“The Big Bang Theory”) and is loosely based on his own experience as a white odd-manout. The series is one example of how CBS, after prolonged criticism about a lack of ethnic diversity, is broadening its lineup.

Good for them, said Arnold.

“It’s never too late to change, never too late to go in another direction,” she said, adding that such growth has to be reflected on-screen and among writers, directors and others involved in a production, both as a matter of equal opportunity and authenticity.

As a black woman, she looks to black writers and directors to be “an extension of my voice,” Arnold said, and she’s found that on “The Neighborhood.” If a script strikes the wrong note, she said Reynolds is responsive. The result, she said, is a show that deserves to be seen.