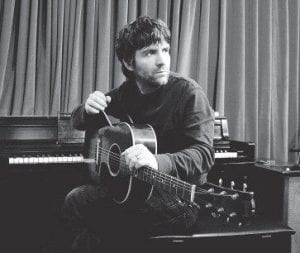 Whitesburg is the smallest town by far that acclaimed musician Tim Easton will visit while touring to promote his new album, Porcupine, which was released Tuesday. A full band will back Easton at Summit City on Main Street for his concert on Derby Night (May 2). Popular Wise County, Va., band Folk Soul Revival opens at 9 p.m. Admission is $10. (Photo by Paul Moore)

Acclaimed musician Tim Easton is returning to Whitesburg this weekend with a renewed desire for playing Midwestern rock ‘n’ roll.

Easton is returning to Summit City on May 2 (Derby Day) with a band of supporting musicians who helped him record his fifth and liveliest album, Porcupine, which was released Tuesday and represents a much more aggressive style of music for Easton.

“I wanted to make some noise again,” Easton, a native of Ohio, says of the album and new tour, which opened Monday in Fort Wayne, Ind. “I’d been making some sonically conservative albums out here in California (he now lives in Joshua Tree), with a little less of that Midwestern bite that was part of the sound I had been making with my band when I was growing up.”

The album is a return to what Easton calls “that jagged, midwestern rock and roll sound.” From the “1-2-3-4” that opens lead song “Burgundy Red,” a rocker about a woman who wakes up after a night of hard partying, it is obvious that Porcupine is a major departure from the 2006’s much quieter but highly-acclaimed

Easton went back to Ohio to find the rhythm section — Sam Brown on drums and Matt Surgeson on bass — that gives the new album its “bite.” Rounding out the band is renowned guitarist Kenny Vaughn, who Easton met while Vaughn was playing guitar

tour. Vaughn has since been a focal point of country musician Superlatives.

“That guy can play anything,” Easton said. “He’s got a lot of style and a lot of knowledge of the history of music. He can play any style well, and learn fast. When Kenny would ask me what I want for a particular song, I would just say ‘have a good time.'”

The new album is produced by Brad Jones, who first recorded Easton in the 1990’s when Easton was with the band the Haynes Boys.

“I knew I wanted to make a louder record, right off the bat,” Easton said. “I think that’s a phase for every songwriter who’s involved in both folk music and rock ‘n’ roll — they make the loud ones and the quiet ones. Steve Earle, who’s a great example and influence, is like that. He’s quiet, then loud.”

In addition to “Burgundy Red,” other guitar-driven “loud” songs on the new album include “Broke My Heart,” “Get What I Got,” and “Baltimore,” a song Easton says he “made up about a guy who takes a bunch of drugs and goes on a murder spree.”

Among the more acousticbased standouts on Porcupine are “The Young Girls,” “A Stone’s Throw Away,” and “Seventh Wheel,” a jangle that sounds equal parts Bob Dylan, the Byrds, and early R.E.M.

of Easton’s tour in support of Porcupine,

and follows shows this week in Minneapolis, Chicago, and Columbus. On Sunday, Easton will perform in Charleston, W.Va., as part of the Mountain Stage radio concert series at the Cultural Center Theater. Shows are also scheduled for New York City, Philadelphia, Atlanta, and Orlando before the current leg ends June 5 in Los Angeles.

Admission to Saturday’s show is $10. Opening act Folk Soul Revival, a popular band from Wise County, Va., will take the stage at 9 p.m.