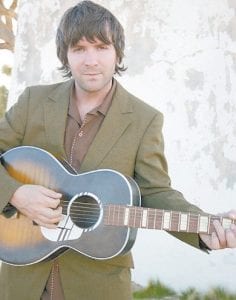 Highly-acclaimed singer-songwrter Tim Easton (above) is scheduled to perform in concert at Summit City next week.

Top-quality music returns to Letcher County next week when singer-songwriter Tim Easton takes the stage at Summit City in Whitesburg on Wednesday, July 23.

Easton was born in Lewiston, New York and grew up in Akron, Ohio where his father worked for Goodyear. He was in grade school when that company relocated his family to Tokyo for three years, and it was in Japan that he first heard the Beatles (still his favorite band). His guitar playing older brothers hipped Tim to albums by acoustic guitar wizards Doc Watson and Mississippi John Hurt plus contemporary singer/songwriters like John Prine. Other musical favorites and influences include Joni Mitchell, Elvis Costello and Lucinda Williams. Tim says, “I enjoy and appreciate a great pop record as much as I do, say, the Louvin Brothers.”

Easton’s childhood sojourn in Japan had prepared him for the pleasures and uncertainties of foreign travel. In the early Nineties, he left the Midwest to live and work in both London and Paris. He hitchhiked around Ireland and mainland Europe and made his first recordings in Prague. Easton’s years of busking honed both his finger picking and flat picking guitar skills as well as his warm, conversational singing style.

Upon his return to the States, Easton joined a rock and roll band called The Haynes Boys and in 1997 the group released the rousing, rough-edged album Guardian Angel (Slab Recordings). It was also at this time that Easton and the band began to cover and sometimes back up the songwriter J.P. Olsen, a fellow Ohioan whose songs Tim still performs and records today. In 1998, Easton recorded his first solo album, Special 20, in Nashville and released it on his own Heathen Records (New West rereleased the album in 2003). Easton moved to Los Angeles in the fall of 1999 and signed a publishing deal with EMI where Special 20 had sparked interest.

Easton began appearing regularly at such LA clubs as Largo and McCabe’s and was soon signed to a deal with New West Records. His first album for the label was The Truth About Us and it was something of an Americana super-session. Produced by Joe Chiccarelli, it featured backing by members of Wilco and guest appearances by Victoria Williams and former Jayhawk Mark Olson. The album was issued in January 2001 and Easton toured for the next 18 months, playing shows of his own and opening for John Hiatt, Mark Eitzel, Cowboy Junkies, The Flatlanders and The Jayhawks among others. The Truth About Us garnered widespread critical acclaim: The Chicago Sun-Times hailed it as “simply stunning,” while The St. Paul Pioneer Press called it “the first great rock record of 2001 … a portrait of America that feels like the lost link between X’s Los Angeles and Springsteen’s Nebraska.”

In 2003, Easton relased the highly-regard album Break Your Mother’s Heart on New West, followed by Ammunition in 2006. He is scheduled to release a new album, One for the Ditch, next month.

Visit www.timeaston.com for more information about Easton. Easton also has a page on MySpace (www.myspace.com/ timeaston).

Summit City is located at 214 Main Street in Whitesburg. The venue’s telephone number is 633-2715. The web address is: www.summitcitylounge.com