Tim Michaels and the Drillers to headline Jenkins festival 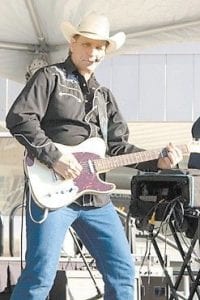 “Dyn-o-mite” is usually the first word I hear in describing the dynamic Tim Michaels of Pikeville.

The first time I saw Tim perform was last winter at the American Legion in Jenkins. There were only about 50 people in the audience, but he was playing like it was a crowd of 5,000. With the first song he captured the audience and held them for the whole evening.

On that occasion Tim was booked as a one-man act, but if you closed your eyes and listened, you would have thought it was a full band. Backed up with soundtracks, Tim alternated from one live instrument to another throughout the show. He has mastered eight musical instruments.

Not only is his musicianship superb, but his personality glowed and permeated through the entire venue. Tim kept the patrons on the dance floor all night with an occasional slow song to let them rest. You could tell that he loved his audience and his audience loved him. It was apparent that he thrives on that love as he played tirelessly for hours.

Tim’s booking agent, Richard McVeigh of Sound Lab Production, Big Tyme Management in Nashville, Tenn., says that Tim is one of the easiest acts to book because of his personal love for the music. “I have never seen anyone with so much passion for the people that he plays for!”

Tim began singing when he was old enough to sit in a church choir pew. At age 11, he had to stand on a pop crate when his family recorded their first stereo longplay album. Shortly thereafter, he began playing acoustic guitar.

He taught himself to play piano in high school on a school piano because he didn’t have one at home. He began playing piano for the family band in 1978.

Tim worked as a DJ in the Pikeville area for several years. During that t ime, he worked with local talent because he believes that eastern Kentucky has the best in the country. One day a dear friend of Tim’s (who has since passed away) told him that it was past time for doing something for himself. So after almost 40 years of singing and playing music with his family, Tim started playing out on his own.

Even the most casual listener will determine that Tim has a very wide vocal range and is equally adept when singing rock, pop or country music. Tim has played many shows at the Landmark Inn Hotel in Pikeville to sold-out audiences every night. Through the summers he travels throughout the region playing concerts and festivals. He has also gotten national recognition on many occasions and has opened for several major recording artists including the likes of Kenny Chesney, Billy Ray Cyrus, George Jones, Marty Stewart, Confederate Railroad, Martina McBride, Neil McCoy, Exile, Diamond Rio and many others.

In 2005, Tim recorded his first album, “A Night at the Top”, featuring some of the best material from his live performances.

Check out Tim’s website at timmichaels.net and listen to his music or better still, see Tim Michaels and the Drillers live at Jenkins City Park on Thursday, August 27, beginning at 8 p.m.

This year’s Jenkins Homecoming Days Festival promises to be among the best ever. On Friday night the legendary Marlow Tackett returns for a command performance. On Saturday night Ralph Stanley II and his band will perform songs from his latest country music album “This One is Two” and selections from his recent bluegrass music albums.

The Homecoming Days Festival will feature good, wholesome entertainment events for the entire family including 15 hours of live music from the stage. Some of the other events include a free train ride for six hours on Friday and Saturday, arts and crafts, novelties, games, contests, carnival attractions, a parade, free health screen, and 15 food booths which open at 11 a.m. daily.

Our committee has recently purchased 150 new chairs so get there early. Those who arrive later will need to bring their own chairs.