Time for another shake-up? 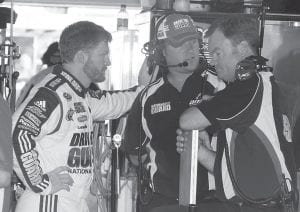 With a nondescript 19th-place finish at Michigan International Speedway, Dale Earnhardt Jr. all but ensured he’ll miss the Chase for the Sprint Cup championship for the third time in four years.

That wasn’t supposed to happen. Not with all the resources Hendrick Motorsports poured into rebuilding Earnhardt’s team in an effort to turn NASCAR’s most popular driver if not into a champion, then at least a winner again.

Yet Earnhardt and his No. 88 team have fallen short again, and with three races left to set the Chase field, he’s 129 points out of the 12th and final qualifying spot.

He was short with reporters following Sunday’s race, in which he struggled most of the afternoon and was in no mood to discuss his Chase chances after his fifth consecutive finish outside the top 15.

Nobody questions whether or not Earnhardt works hard. In fact, those around him insist the driver has never put forth a greater effort to turn around his fortunes and fulfill the expectations that come with being the son of one of NASCAR’s greatest racers. With a 19th-place finish at Michigan on Sunday, Dale Earnhardt Jr., shown here talking with crew members on Saturday, all but ensured he’ll miss the Chase for the Sprint Cup championship for the third time in four years. (AP Photo)

All the pieces were supposed to finally be in place when he teamed with Rick Hendrick in 2008, positioning himself with NASCAR’s top team because, in his own words at his 2007 hiring announcement, “I think that I’ll have a good opportunity to succeed and win a lot of races. Personally, I think I will cherish a championship on my mantle when it’s all said and done.”

Only the reality is that Earnhardt has just one victory in 95 races with HMS. He made the Chase just once, in 2008, when he spent most of the season ranked third in points but finished 12th in the final standings.

Last season was the worst of his Cup career, and Hendrick had to fire Earnhardt’s longtime crew chief, Tony Eury Jr., in an effort to salvage the season. It didn’t really work as Earnhardt notched only five top-10 finishes and a careerworst 25th-place finish in the standings at the same time teammates Jimmie Johnson, Mark Martin and Jeff Gordon led a 1-2-3 sweep of the points.

The focus on the No. 88 team has clearly hurt Martin’s bunch: A five-race winner and championship contender last season, he’s yet to make it to Victory Lane this year and finds himself trailing Clint Bowyer by 35 points for the final Chase berth.

Clearly, Hendrick’s efforts haven’t worked, for Earnhardt or Martin, as Martin’s team has taken a step back and any improvement shown by Earnhardt is certainly not at the expected levels.

So now it’s time to try something else.

Hendrick last week solved one of his pressing matters by stashing Kasey Kahne at Red Bull Racing for next season as he waits to replace Martin in the No. 5 car in 2012. Kahne has a crew chief he really likes in Kenny Francis, and Francis has seemed to be the odd man out in the entire Kahne saga.

It appears he can’t move over to Red Bull next season with Kahne because manufacturer Toyota seems opposed to allowing a crew chief a one-year internship with its parts and pieces — the chance to gain insight Francis could later take elsewhere, namely Hendrick Motorsports.

So Hendrick technically has an opportunity to grab Francis now. It obviously wouldn’t be with Johnson or Gordon, who both have longtime relationships with crew chiefs who this season signed lengthy contract extensions to stay right where they are.

Instead, Hendrick should put Francis on the No. 5 car immediately, and let him work next season with Martin in preparation for Kahne’s 2012 arrival. That of course pushes out Alan Gustafson, one of the most loyal employees Hendrick has ever had.

But Gustafson wouldn’t have to go far. It just might be that Gustafson could be the answer to all of Earnhardt’s woes.

Hendrick earlier this year described Gustafson as the ultimate company man, the employee he never had to worry about turning down a task that the boss believed would benefit the company.

“If there’s ever a soldier that you have to take into battle with you, it’s Alan Gustafson,” Hendrick told The Associated Press.

Earnhardt is heading into the fourth year of a five-year contract with HMS, and for whatever reason, Hendrick has been unable to give him the chemistry and confidence he had during a 15-win stretch from 2000 to 2004.

Earnhardt has remained supportive of McGrew, who graciously stepped into the hardest crew chief job in the garage and has helped the driver show flashes while operating under an intense spotlight. But for whatever reason, it’s simply not clicking consistently, and it may be time for someone else to get the chance.

This might be the one time, though, that Gustafson balks at a potential Hendrick reassignment. He’s built the No. 5 car to its current level, weathering a tumultuous period with Kyle Busch, a noncompetitive stretch with Casey Mears, and, finally, the pairing with Martin and a shot at last year’s championship.

Gustafson has earned the right to decline another rebuilding project, but is more prone to do anything the boss asks of him.

At this stage, it might be a request Hendrick can’t afford not to make