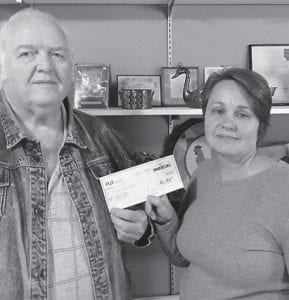 Eolia Christian Community Outreach received a donation of $6,000 for its food pantry from the EQT Foundation. The organization expressed thanks to the foundation for the donation and said how much it helps the food pantry. Pictured are President of the Board Kester Holcomb and Director Amy Gross after receiving the donation.

Hello everyone! I hope your weather has been as nice as we’ve had in the Ohio Valley area for the past few days. Friday was a perfect day, and Saturday was on the chilly side. At least it isn’t snowing.

Friday as I took my son Keith to work, the redbud trees alongside the road reminded me of the mountains I still call home. I told Keith that I just wanted to keep driving and head for the hills again as the dogwood trees are probably showing their beautiful color.

Once again he told me if I wanted to go to get on my way.

Keith is trying to get his car in good running condition so right now I don’t want to go too far in case he needs me.

The redbuds are beautiful in our area. They aren’t as thick along the roads like in the mountains. Spring is beautiful no matter where you are, but to me it is just more special in the mountains of eastern Kentucky.

There was so much I wanted to do while I was there but due to not feeling good I didn’t get to stop by Delana’s and Libby’s shops. However I am thankful for what I was able to do.

I was asked why I didn’t move back to the mountains since I love it so much. Don’t think I haven’t thought about it. I know since my children and grandchildren are not that far away from me, I wouldn’t be completely satisfied living that far away.

This time of year the longing just won’t go away as I see wild creases blooming. I think of Mom and Grandma out picking “wild sallet” to cook. Grandma and Mom would pick two types of plantain, one had a long, narrow leaf, the other a round, something called speckled dock, lamb’s quarter, and I don’t know what else.

After it was cooked tender, they would put a little bacon grease in a skillet and fry it. Mom would pour a little vinegar on her sallet, then of course eat it with cornbread. Just as quick as poke would be up, you could bet it was broken off, cleaned and fried. I believe the young poke stalk was the only thing that was fried, as the leaves were cooked with the other greens.

There was something called frog lettuce, and dandelions that could be washed and cut up with green onions. They poured hot bacon grease over and wilted it like lettuce.

I know several of you readers remember growing up the same way.

Keith loves fresh mustard and turnip greens. I wish I had a place to plant some for him.

Johnny and Ann Calihan are proud great-grandparents, and their daughter Sue Wagner is an even more proud grandmother as Sue’s daughter Ashley and her husband Eric have a beautiful set of twin girls.

The babies were premature as Ashley’s pregnancy has been difficult from the beginning. Thank God she was able to carry the babies as far as she did as the babies are very tiny, weighing just a little over two pounds each. Please keep the family in your prayers.

Sue was on her way back to her parents’ as she had a doctor’s appointment, but then plans changed with Ashley, so Sue had to catch a flight. Sue’s husband Tom and their daughter drove Sue’s car.

Linda Hall, it seems we have a mutual friend, Betty Ison, whom I met about 15 years ago. Betty was a Hamilton, and she remembers you and your sister Dorothy.

Congratulations to my granddaughter Jessica Nottingham as she took first place in female archery.

Some of you who read my column may remember a family from Mill Branch. Andy Bates was a preacher, and several of the Bates family have lived in Indiana for years. Sympathy goes out to the family who lost a brother, Kermit Bates, and the next day lost a brotherin law also.

Carcassonne Community Square dance will be May 12, 6-9 p.m. Sunrise Ridge will be the featured band. Mike and Marcia, dance one for me. Appalachian Day Festival is May 11-13.

The time is catching up on me, so until next time, Rose Ballard, 9110 Lawrenceburg Rd., Harrison, Ohio 45030, email: Bluegrassmama4@aol.com.