Time to get your flu shot 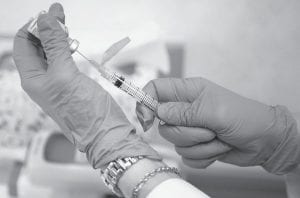 A nurse practitioner prepared a flu vaccination recently. It’s flu-shot season again, and for the first time health authorities are urging nearly everyone to get vaccinated — and people 65 or older even can choose to try a new high-dose version. (AP Photo)

It’s flu-shot season already, and for the first time health authorities are urging nearly everyone to get vaccinated. There is even a new high-dose version for people 65 or older.

What a diff erence a year makes: Crowds lined up for hours for scarce shots during last fall’s swine flu pandemic, when infections peaked well before enough vaccine could be produced. This year, a record vaccine supply is expected — an all-in-one inoculation that now promises protection against that swine flu strain plus two other kinds of influenza.

Shipments began so early that drugstores are off ering vaccinations amid their back-to-school sales.

But without last year’s scare factor, the question is how many people will heed the new policy for near-universal vaccination. No more stopping to check if you’re on a high-risk list: A yearly dose is recommended for virtually everyone except babies younger than 6 months — the shot isn’t approved for tots that young — and people with severe allergies to the eggs used to brew it.

“Influenza is serious, and anyone, including healthy people, can get the flu and spread the flu,” said Dr. Anne Schuchat of the Centers for Disease Control and Prevention. “Flu vaccines are the best way to protect yourself and those around you.”

The CDC was moving toward that policy even before last year’s pandemic brought home an inescapable fact: The flu virus doesn’t just kill grandparents and babies and people with weak lungs or hearts, although they’re particularly vulnerable. It also can kill healthy pregnant women and 30-somethings. And 5-year-olds.

“We were discussing how we were going to go get his Star Wars Halloween costume after he got out of the hospital … and all of a sudden his eyes lost their focus,” said Serese Marotta of Dayton, Ohio, describing for reporters how her son Joseph, 5, died of swine flu last October before vaccine was available in her community. She urged families to make vaccination a priority.

Here are some questions and answers about flu:

Q: I got vaccinated against both seasonal and that so-called H1N1 flu last year, so why do I need vaccine this year?

A: It protects against a diff erent strain of the H3N2 influenza family that has cropped up, as well as last year’s swine flu, part of the H1N1 family, and a Type B strain. Every year a diff erent flu vaccine is brewed to match the constantly changing flu strains that circle the globe.

Q: Why is there a new high-dose version for seniors?

A: Your immune system weakens with age, so it doesn’t respond as actively to a flu shot. Sanofi Pasteur’s Fluzone High-Dose quadruples the standard dose for people 65 and older. This winter, scientists will track if that translates into less illness. Until that proof’s in, the CDC says it’s OK to choose either option.

Sanofi is finalizing how much to make, and availability may vary with location. For example, Dr. Marvin Bittner of the Veterans Affairs Medical Center in Omaha estimates the new shot might benefit one in four seniors and said his center has ordered enough for that population, while other VA clinics aren’t ordering as much.

Q: Will I need just one shot?

A: Most people will, but any children under 9 getting their first-ever flu vaccine will need two, a month apart, to prime their immune systems.

Q: What if my child’s first-ever vaccine was last year and she got one dose of seasonal and one dose of swine flu vaccine?

A: She wasn’t primed enough and needs her two doses this year, said Dr. Michael Brady of Nationwide Children’s Hospital, who co-authored the American Academy of Pediatrics flu vaccination guidelines out Monday.

Q: Will there be enough vaccine?

A: Manufacturers project 170 million doses. Obviously that won’t cover the entire population, but the CDC knows its near-universal vaccination policy won’t spark a stampede for shots. Before last year, flu vaccine was recommended for 85 percent of Americans but only about a third got vaccinated. Last year nearly all 114 million doses of seasonal vaccine were used, but as the swine flu outbreak slowed, just 90 million doses of the special vaccine were used out of nearly 162 million eventually produced for the general public.

A: Young children, anyone 50 or older, anyone with chronic medical conditions such as asthma or heart disease, pregnant women. Also, health workers and caregivers of infants can infect the vulnerable unless vaccinated.

Q: Who can use the nasal spray vaccine?

A: FluMist is for healthy people 2 to 49, no pregnancy or underlying health conditions.

Q: When should vaccination start?

A: Chain pharmacies already have started vaccinating; protection will last all winter. It takes about two weeks to kick in, and flu typically starts circulating around November.

A: Unprecedented safety monitoring last year turned up no rare side effects from the special swine flu-only vaccine sold in the United States. “We’re hoping a lot of the myths people had about the influenza vaccine may be a little bit less of a concern,” said pediatrics specialist Brady.

Abroad, a few reports of narcolepsy after a European swine flu vaccine are being probed; that vaccine didn’t sell here. An Australian seasonal vaccine dosed for young children won’t be sold here after being linked to some fever-related seizures in that country.

Q: Why should I bother since fewer people than usual died last year?

A: Last year’s U.S. toll: about 12,000 deaths, 60 million illnesses and 265,000 hospitalizations. New CDC statistics last week suggest flu strain mortality varies widely, from 3,000 in an exceptionally mild year to 49,000 in a recent really bad one — and it’s impossible to predict how bad each year will be.