Time to make pickles and chow-chow 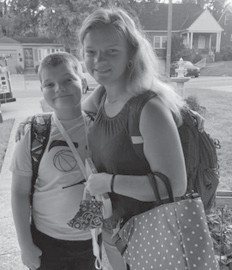 Katie Nottingham and Kyle Nottingham, big sister and brother, on the first day back at school. The Nottingham kids are so fortunate, as they live down the street from Beechwood School, with kindergarten through senior years. They are the children of Scott and Anna Nottingham and the grandchildren of Rose Ballard

Hello everyone! This time of year takes me back to childhood as garden season would be coming to an end. Mom would be gathering green tomatoes and cabbage that would be left from making several quarts of sauerkraut, and of course onions, as Mommy would make a delicious mixture called chow-chow. Mommy never had spices like a lot of recipes call for in cookbooks, as she used vinegar and water. I think she might have used a dab of pickling spice.

On a shelf somewhere or anywhere Mommy could store you would find dozens of jars of canned half-runner green beans, several quarts of pickled beans, and a few quarts of mixed pickles, which were beans and corn. Of course there were jars of pickles, which we never knew to call them dill, or any other names at that time.

Oh to go back to childhood when things were simple, yet hard. You had to raise your food to survive, as there wasn’t something called food stamps.

Later I did hear of something called commodities, that I think was given by the government. I was much too young to know where they came from. Daddy and Mommy never received them as Daddy worked like a dog in the coal mines. 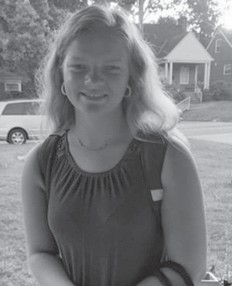 First day of senior year, where has the time gone? Katelyn Notthingham is the daughter of Scott and Anna Nottingham, and granddaughter of Rose Ballard.

Commodities were misused even back in those meager times, as people would get cheese, and some would sell the free cheese for $5 a box to someone that could afford it. Cheating has a way of being done regardless of who, what or where.

Grandma Rosa Hall had no income, so she received commodities. I can remember when Grandma had no income, and I have no way of knowing how she paid the few dollars a month to rent a house. Then when I was very young, she started drawing a check, called old-age pension. I think she received about $13 a month.

Once again the weather feels like we are having an early fall in this section of the Ohio Valley. We’ve had cool mornings, and dense fog as thick as pea soup with limited vision driving, especially along the low line river area where we live.

As usual I am still reliving a few peaceful days in the mountains I call home in my heart. 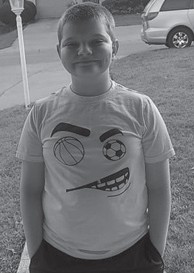 Kyle Nottingham first day of fifth grade. He is the son of Scott and Anna Nottingham, grandson of Rose Ballard.

Since the pandemic virus is rampant again, plus I wasn’t feeling good due to stomach issues and low blood sugar, then hearing of a friend here local having serious issues, I decided not to visit very much.

I spent some quality time with my niece Sue Hall. Yes, Daphne Korner, for your nosy inquiry, asking Sue if I drove to the mountains by myself, even forgetting to take a spade, which I regretted, however, I might have taken a friend called Black Beauty, which rode in silence in my glove compartment. You never know what I might have, as I am such a bad and dangerous person.

Sue and I did enjoy a fast trip to the flea market at Wise, Va. I really enjoy going there. This time I really didn’t buy very much. Sue made up for it, as she got several beautiful things.

I did get to visit with Bernice Grubb for a few minutes, and said hello to her son Chuck. I got a brief hug from Bernice’s grandson Mike Grubb, who had fallen and injured his ribs and back, so the hug was short.

Saturday, with Sue insisting, we rode to Blackey in search of the cemetery where my grandmother Betty and John Barton, uncles Boyd and Charles Barton, Elmer and Ted Adams are buried.

We found the area, however, Jack Adams was so right as you can’t get to the top of the mountain. The road is narrow and has a grass-covered path.

Actually, you have to be coming from Roxana way to make the swing up a steep road. Just as I asked Sue not to go up, she took off, like a shot, so the next instant, as I said, “Sue, don’t go up the hill”, well I may as well said go ahead.

Sue is a very good driver, however, I was afraid the truck would slide, and you never know when brakes can fail. Sue laughed so hard, I don’t know how she managed to drive. Believe me, I was scared.

The only way I will attempt this again is if Billy Collier goes with Sue and me. Then we will have to wait for when it is sort of cool, as no way can I walk a distance up that steep hill in this hot weather, no matter how much I enjoy it being hot.

I had so many plans to visit, but that didn’t happen. Although I must admit, sitting on the porch at the campus was so relaxing. I got to see the most beautiful bluebird, this was not a bluejay, just a small bluebird that was blue all over then a cardinal, and all of a sudden two owls appeared.

I am so thankful I didn’t decide to go anywhere.

Friday evening I did get a little disappointment thrown my way. I cut my visit short to be with Sue, as I intended to go to Campbell’s Branch Community Center to enjoy music.

I was even more excited as Glena Turner from Alabama was meeting me.

When I arrived at the community center, there wasn’t a car in the parking lot. All of a sudden I had a premonitions, closed due to the virus.

I started to leave, then turned around decided to wait a while longer. A couple of people from Knott County showed up. The woman had a smartphone, and she was also smart enough to call Darlene Campbell, who informed her the center was closed. I enjoyed the evening at the campus.

Carcassonne Community Center has cancelled the September dance. It is supposed to resume in October. That will remain to be seen.

Mike and Marcia Caudill have everyone’s welfare in their concern of not spreading the virus, which a lot of people don’t seem concerned about their health by not taking the vaccination!

I think back to school days of childhood. We had no choice except to take the smallpox vaccine. I have the scar yet. Then the polio.

When I married so young and started a family, my babies were required to have what was called a 3-in-1 shot. I don’t recall a big whoopla, over that.

Sunday, Sue and I planned something which didn’t work out. I had made previous plans to visit Mike and Marcia Caudill for our annual marshmallow roast. Well, it decided to rain. Marcia said come on down and we can visit inside. Instead we talked on the phone, and I enjoyed the view of the grounds of the campus.

Sometimes I am so tempted to take Mike and Marcia up on their offer to stay with them, as they have a beautiful balcony. I can just imagine sitting there with my pen and paper being inspired to write.

Oops. Sue and Billy Collier also have a new place with a complete empty upstairs with a side entrance and a balcony. That is also tempting.

The only thing that really concerns me staying at the campus is limited or no phone reception, which in a way is a blessing in disguise to me.

Oh, I am aware if I had a smartphone I would possibly have better reception, I will just leave it as it is. I don’t want a smartphone, and as long as I am in control of my own thinking, it is my life, my choice. Oh yes, there is another thing, you can take pictures. I am not big on selfies, or even too much on pictures of myself. There’s some scenery of which I would love to be able to take pictures. Again, I don’t have a camera and don’t know how to use the newfangled ones.

It is hard to believe that August is almost gone. In a month or so we will be having fall colors. In fact, there’s a mulberry tree in our yard that is losing its leaves. It is like raining leaves at times.

My son Keith Ballard mows the grass and in a short time, the leaves are covering a portion of the yard again. Like everything in life it is vicious cycle. After fall we have so many months of cold weather. The only bright spot is Christmas as Thanksgiving is forgotten in between Halloween and Christmas.

Please keep Johnny and Ann Calihan in your prayers as they are still going through a lot of things that are about to change their lives. Keep Hayward Day in your thoughts and prayers as he is having health issues again.

Keep Buddy and Bernice Grubb and family in your prayers also. I wish I could help everyone in some way. Since I can’t, I do believe in prayer.

Hello Bill and Mary Halcomb and their daughter Beverly. Bill, I hope if you decided to head for the mountains I call home, you had a safe trip.

Hello Les and Pat Wagner and Tommy Tindal. I hope you are behaving since I am not there to check on you.

It is time I get busy as I have something pressing to do.