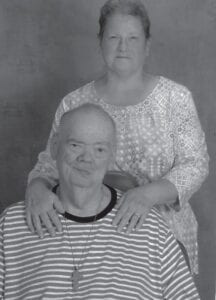 Timmy and Sue Tyree Smith will celebrate their 50th wedding anniversary with a card shower, due to the current danger of the COVID virus.

The couple were married February 6, 1971. The Rev. Snyder performed the ceremony at Mt. Carmel United Methodist Church in Clyde, Ohio. Mrs. Wilbur Folk played the organ, and Roseanne Krouse sang. Best man was Dan Bush of Tiffin, Ohio, and maid of honor was Cecelia Adair, sisterin law of the bride. Parents of the couple were the late Richard and Sharon Church Smith and the late Jody and Florence Adair Tyree. Mrs. Smith is the granddaughter of the late Sam Henry Tyree and Nancy Hawkins Tyree.

In 1995 the couple moved to the Clyde, Ohio, homestead. Seven generations of Mr. Smith’s family have lived on the property.

Florence Tyree’s only advice to the Smiths was never to go to bed angry, when asked the secret of a long marriage.