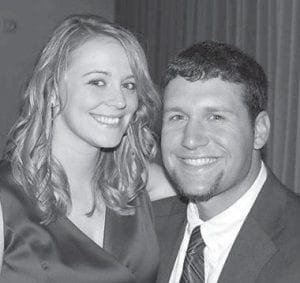 Jessica Ranee Bentley and Darren Thomas Stepp will be married at 2 p.m., Saturday, May 30, at the Mary Henry Dining Hall at Camp Bethel in Wise, Va. The brideelect is the daughter of Teresa and Jerry Bentley of Jenkins, and the granddaughter of Norma Clark of Cumberland and the late Gene Clark, and Mildred and Jasper Bentley of Beefhide. She is a 2002 graduate of Jenkins High School and a 2006 graduate of the University of the Cumberlands. She is a third year medical student at the Georgia Campus – Philadelphia College of Osteopathic Medicine in Suwanee, Ga. The bridegroom-elect is the son of Tammie and Tommy Stepp of Cartersville, Ga., and the grandson of Donald and Eva Jo Stepp and Cleta and Rex Hitchcock, all of Cartersville, Ga. He was graduated from Cartersville High School in 2003 and attended the University of the Cumberlands on a football scholarship, graduating in 2007. He is employed at Chemical Products in Cartersville, Ga. After their marriage, the couple will reside in Kingston, Ga.