Power rock trio Rose Hill Drive, whose music has been compared to Led Zeppelin and Cream, is led by brothers Jacob Sproul, right, and Daniel Sproul, left, who are pictured here performing with legendary Who guitarist Pete Townshend. The band will perform at Summit City in Whitesburg on Monday, November 10 at 9 p.m.

An amazing lineup of musicians will appear at Summit City in Whitesburg during the next week.

whose debut album The

Good Life continues to draw rave reviews. The show is scheduled to begin at 9 p.m.

On Monday (Nov. 10), Summit City will host power rock trio Rose Hill Drive, a highly-acclaimed band from Boulder, Colorado who have opened concerts for The Who, Black Crowes, Wilco, Aerosmith, and Van Halen. 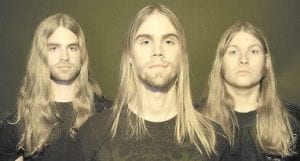 Visit www.myspace.com/rosehilldrive to learn more about the band and to hear how they sound. 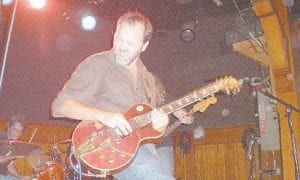 Blue Mountain guitarist Cary Hudson has been named one of the Top 10 alternative rock guitarists of all time by Gibson Magazine. To hear the band’s music and learn more about them, visit www.myspace.com/bluemountainlauriecary.