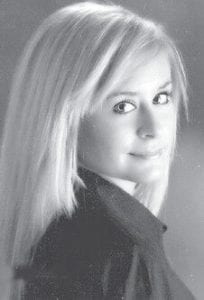 Lauren Channell, daughter of Jeanne Kincer-Engle of Payne Gap, and the late Gregory Channell, will perform her junior recital at Brock Auditorium on the campus of Eastern Kentucky University at 7 p.m., Tuesday, March 25.

Channell is a vocal performance major at EKU where she has participated in the Concert Choir, the University Singers, the EKU Opera, and the Madrigal Choir. She also plays oboe in the Concert Band and Double-Reed Ensemble.

Channell maintains a 4.0 grade point average and has been on the President’s List and Dean’s List in each of the six semesters she has attended EKU. She is a member of Delta Epsilon Iota Academic Honor Society, The Golden Key International Honour Society.

Channell was chosen to participate in the International Scholar Laureate Program, Delegation in Music this summer when she will study in Vienna and Salzburg, Austria; Prague, The Czech Republic, and Venice, Italy.