To take the diamond at Pikeville 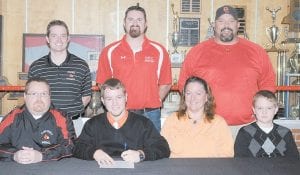 Jesse Bates, a senior at George Rogers Clark High School in Winchester, has signed a letter of intent to play baseball at the University of Pikeville. Jesse is pictured with his parents, Morris and Tracy Bates, his brother Dustin Bates and (back row left to right) Clark County Athletic Director Ryan Nolan, GRC head baseball coach Matt Ginter, and his strength /conditioning coach Rick Mitchell. Jesse is the grandson of Jesse and Stella Bates of Whitesburg and Corene and the late Eddie Holbrook of Mayking. He is the great-grandson of Morris and Della Maggard of Cowan.