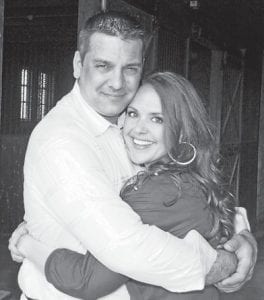 — Mr. and Mrs. William and Josephine Richardson announce the forthcoming marriage of their son, William Jared, to Samantha Jon, daughter of Mr. and Mrs. John and Debbie Rogers of Somerset. He is a graduate of Whitesburg High School and the Culinary Institute of America in New York, where he was graduated with honors. He is the executive chef at the Capitol Plaza Hotel in Frankfort. He is the grandson of the late Gayle and Marion Richardson of Indianapolis, Ind., and the late Ercole and Anna D’Amato of New Haven, Conn. She is a graduate of Somerset High School and Eastern Kentucky University, where she received a bachelor of arts degree in communications. She is the marketing coordinator for Cardinal Hill Rehabilitation Hospital in Lexington. She is the granddaughter of Samuel Ray Godby and the late Barbara Joan Godby, and the late Mr. and Mrs. John and Beulah Rogers, all of Somerset. The wedding will take place November 3 at the First Baptist Church in Somerset. Formal invitations have been sent.