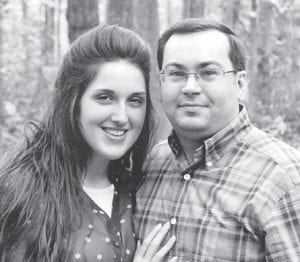 Tom and Delana Caudill of Viper, announce the forthcoming marriage of their daughter, Amanda Faye Caudill, to David Allen Byrd, son of Kenneth and Teresa Byrd of Raven, Va. She is the granddaughter of the late Hendrix Caudill and the late Joyce Caudill of Viper, and the late Raymond McCool and Freda McCool of Big Cowan. He is the grandson of Raleigh and Marie Byrd of Bandy, Va., and the late Rex Ward and Wilma and Earl Compton of Keen Mountain, Va. The wedding will take place Saturday, December 7, at the Whitesburg Holiness Church. The couple will reside in Raven, Va.