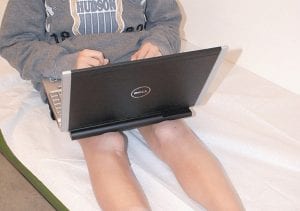 In these photos provided by the journal Pediatrics, a 12 year-old boy is pictured using a laptop balanced on his bare legs which (right) show evidence of “toasted skin syndrome.” According to recent medical reports, exposing skin to the high temperatures created by laptops can lead to the syndrome, an unusual-looking mottled skin condition caused by long-term heat exposure.

Have you ever worked on your laptop computer with it sitting on your lap, heating up your legs? If so, you might want to rethink that habit.

Doing it a lot can lead to “toasted skin syndrome,” an unusual-looking mottled skin condition caused by long-term heat exposure, according to medical reports.

In one recent case, a 12-year-old boy developed a sponge-patterned skin discoloration on his left thigh after playing computer games a few hours every day for several months.

“He recognized that the laptop got hot on the left side; however, regardless of that, he did not change its position,” Swiss researchers reported in an article published this week in the journal Pediatrics.

Another case involved a Virginia law student who sought treatment for the mottled discoloration on her leg.

Dr. Kimberley Salkey, who treated the young woman, was stumped until she learned the student spent about six hours a day working with her computer propped on her lap. The temperature underneath registered 125 degrees. 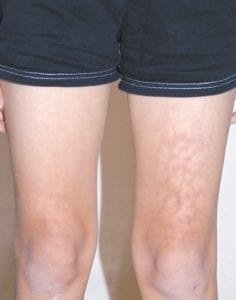 That case, from 2007, is one of 10 laptop-related cases reported in medical journals in the past six years.

The condition also can be caused by overuse of heating pads and other heat sources that usually aren’t hot enough to cause burns. It’s generally harmless but can cause permanent skin darkening. In very rare cases, it can cause damage leading to skin cancers, said the Swiss researchers, Drs. Andreas Arnold and Peter Itin from University Hospital Basel. They do not cite any skin cancer cases linked to laptop use, but suggest, to be safe, placing a carrying case or other heat shield under the laptop if you have to hold it in your lap.

Major manufacturers including Apple, Hewlett Packard and Dell warn in user manuals against placing laptops on laps or exposed skin for extended periods of time because of the risk for burns.

A medical report several years ago found that men who used laptops on their laps had elevated scrotum temperatures. If prolonged, that kind of heat can decrease sperm production, which can potentially lead to infertility. Whether laptop use itself can cause that kind of harm hasn’t been confirmed.

In the past, “toasted skin syndrome” has occurred in workers whose jobs require being close to a heat source, including bakers and glass blowers, and, before central heating, in people who huddled near potbellied stoves to stay warm.

Dr. Anthony J. Mancini, dermatology chief at Children’s Memorial Hospital in Chicago, said he’d treated a boy who developed the condition from using a heating pad “hours at a time” to soothe a thigh injured in soccer. Mancini said he’d also seen a case caused by a hot water bottle.

He noted that chronic, prolonged skin inflammation can potentially increase chances for squamous cell skin cancer, which is more aggressive than the most common skin cancer. But Mancini said it’s unlikely computer use would lead to cancer since it’s so easy to avoid prolonged close skin contact with laptops.