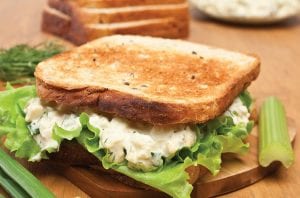 My husband often teases me because even though I can cook complex dishes perfectly, I sometimes burn the toast! Recently, we received a convection/toaster oven from Sears Kenmore. I like its compact size, functionality and numerous cooking applications. I’ve also enjoyed experimenting with all of the ways that you can use a toaster oven to save time and energy.

While researching new recipes for my toaster oven, I discovered some interesting facts about the origins of our modern toaster. The term “toast” is derived from the Latin words “torrere” and “tostum,” meaning “to burn” or “scorch.” Bread was originally toasted over a fire with a stick. As time went on, toast became a popular item in Rome. Later, long-handled toasting forks were used, or the bread was placed in a metal frame with a long handle and toasted over a fire.

After several attempts and a number of electrical fires, the modern version of the toaster appeared in 1893. Scottish scientist Alan MacMasters created one of the first versions of the toaster we use today. The first pop-up toaster was patented by American inventor Charles Strite in 1921.

One of my favorite ways
to use my new toaster/convection oven is to prepare
“hard-boiled” eggs. Baking
the eggs makes them easier
to peel, and they tend to
come out perfectly yellow
in the center without any
greenish rings.
Try this recipe for Toaster
Oven Hard-Boiled Eggs,
and then use them to make
deviled eggs or my recipe
for Spicy Egg Salad Sandwiches.

TOASTER OVEN
“HARD-BOILED” EGGS
Preparing “hard-boiled”
eggs using the toaster oven
is one of the easiest ways I’ve
found to prepare a large or
small amount of eggs for any
number of recipes.
1. Heat toaster oven to
325 F. Put 3 to 6 eggs directly
on the toaster oven rack,
placing them parallel to
the rack so they don’t roll
around. Bake for approximately 30 minutes.

2. Remove the eggs, and
place them into a bowl of
ice water. Crack the eggs
all around and leave them
to soak in the ice water for
approximately 15 minutes
for easier peeling.

1. Place the peeled eggs,
yogurt, mayo and Sriracha
sauce in a medium-sized
bowl, and mash the ingredients together with a
fork until well-combined
but still chunky in texture.
Mix in the vinegar, poultry
seasoning, salt and pepper.
Add the green onion, celery,
parsley or basil. If mixture
seems dry, add another
1/2 to 1-1/2 tablespoons of
yogurt until mixture reaches
desired consistency.
2. Toast bread, if desired,
and allow to cool. Spread
egg salad on the cooled
toast. Top with remaining
slice and serve immediately.
Egg salad can be stored in
an airtight container in the
refrigerator for 3 to 4 days.
Angela Shelf Medearis
is an award-winning children’s author, culinary historian and the author of
seven cookbooks. Her new
cookbook is “The Kitchen
Diva’s Diabetic Cookbook.”