By ROB MERRILL The Associated Press 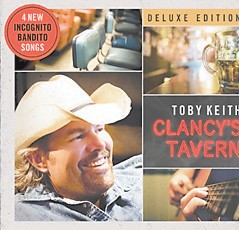 In this CD cover image released by Show Dog-Universal Music, the latest release by Toby Keith, “Clancy’s Tavern,” is shown.

Strip away the No. 1 hits, the sold-out tours and his unabashedly patriotic point of view, and Toby Keith is just a guy who likes telling stories and putting them to music.

He gets lots of help from friends on his 15th studio album, which includes just one track (“I Won’t Let You Down”) credited solely to him. The lyrics of frequent collaborators Scotty Emerick and Bobby Pinson are heavily featured, and the deluxe edition contains four covers Keith performed with his side band of session musicians called “Incognito Bandito” at New York’s Fillmore in 2010.

The 11 studio tracks hit all the customary themes. There’s an old man who spends “a little more in the store for a tag in the back that says USA,” a fiddle-enhanced melody where the singer demands to hear a “three chord stone cold country song,” and a tribute to his late grandmother, nicknamed Clancy, who ran the tavern in the album’s title.

There’s nothing fancy here, just simple stories set to acoustic, electric and steel guitars with choruses you’ll memorize after a few listens. The biggest ear worm of the bunch is “Red Solo Cup,” a ditty written by two sets of brothers who sent it to Keith daring him to record it. It’s an ode to the “best receptacle for barbeques, tailgates, fairs and festivals” that’s guaranteed to end more than a few shows on Keith’s next tour.

CHECK THIS TRACK OUT: “Chill-axin,” a song Keith is destined to sing at an awards-show with Kenny Chesney, as they look for some salt and lime to help “find my paradise and put this broken world on ice.”