Toby Keith takes security into own hands at Pikeville 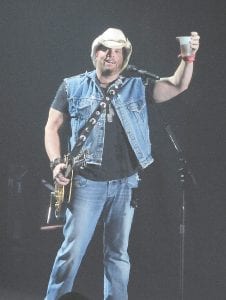 Toby Keith took time to raise a glass to the crowd before his song, “Get Drunk and Be Somebody.” The country music superstar made his first visit to the Eastern Kentucky Expo Center in Pikeville Saturday night, playing to a sold-out crowd of fans in the 7,000-seat arena. (Photo by Chris Anderson)

The Appalachian News- Express reports that Keith went into the audience and offered to fight a man who threw a beer at the stage during a concert Saturday night.

Keith’s publicist, Elaine Schock, says the incident began with the man being disruptive during the concert at the Eastern Kentucky Exposition Center.

After the man threw a beer, Keith left the stage and chased him down. Schock says that when Keith caught up to the man, he told him words to the effect of, “If you want a piece of me, I’m right here.”

Schock and Exposition Center manager Steve St. John say there was no fight, but the incident received national attention when a video of Keith’s apology to the crowd was posted to TMZ.com.