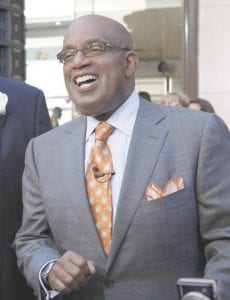 If NBC Universal’s takeover of The Weather Channel wasn’t already noticeable to that network’s fans, it is now.

On Monday, “Today” show’s Al Roker, probably the country’s best-known weatherman, began an hourlong weekday morning show. It’s a symbol of his celebrity status that the show is named “Wake Up With Al” even though he has a co-host, Stephanie Abrams.

The show will include news and business headlines along with the weather, and is designed to be refreshed every 15 minutes for people getting ready for work. Roker drew a comparison to “Today,” where he will continue to work.

Technically, it’s a show that would have been difficult to pull off a decade or so ago. Roker and Abrams will try to create morning show chemistry despite rarely being in the same state. Roker will work at NBC’s Manhattan headquarters, a quick walk across 49th Street to the “Today” studio, and from the road when “Today” travels. Abrams will be based at The Weather Channel’s Atlanta headquarters.

Besides the forecasts, the team will do a “Take it or Leave it” segment, a thumbs-up or thumbsdown on the weather in a particular city. Roker will periodically “wake up” celebrities or viewers with arranged phone calls.

“We will not be cold-calling people,” he said.

After the show, Abrams will cohost “Your Weather Today” with Mike Bettes from 7 to 10 a.m. A rerun of “Wake Up With Al” then airs, with some updates for fastchanging weather conditions.

“Not at all,” she said. “Are you kidding me? I was honored that I was even asked to be part of the show.”

NBC Universal bought The Weather Channel and related properties last year for $3.5 billion. It was added to a stable of cable networks that includes USA, MSNBC, CNBC, Bravo and Oxygen.

The company is big on synergy, and Weather Channel forecasters have begun appearing on NBC News shows. Meteorologists from NBC-owned stations have also popped up on The Weather Channel.

Lisa Gersh, an NBC Universal executive who engineered the takeover, is running The Weather Channel until a new CEO is named. Gersh wants viewers to get more from the network than just the forecast.

One example was Vortex2 last spring, when The Weather Channel embedded a crew with a tornado-chasing project sponsored by the National Science Foundation and others. Some stunning video was captured, even if the six weeks coincided with a below normal period of tornado activity.

The Weather Channel is already a formidable brand, which sells its own forecasts and has a popular Web site. It’s in nearly 100 million homes, one of the mostcarried cable outlets in the country. But Gersh wants to “own” weather programming; if there’s a popular tornado-chaser story to be done, she wants it on The Weather Channel. One is already in the works.

Another goal is more visibility for on-air personalities. The Weather Channel should be as much about the people telling viewers about the weather as the weather itself, she said.

When Oxygen started, it was important to have a presence by Oprah Winfrey, one of the bestknown and respected people within the target audience, Gersh said. The same philosophy holds true for Roker.

Several new series are planned. “Cantore Stories,” due later this year, has Jim Cantore traveling to areas of extreme weather to talk to people who thrive there. Besides “Tornado Chasers,” coming next year are the clip show “America’s Worst Weather: Caught on Camera” and “Weatherproof,” which aims to show the science behind weather conditions.