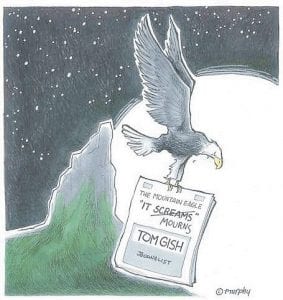 Tom Gish, publisher of this newspaper
for more than half a century, died on November 21 at the age of 82.

Tom had been hospitalized for several weeks after suffering kidney failure. Death, when it finally came, was peaceful, and Tom was surrounded by family members.

Thomas Edward Gish was born on January 28, 1926, in Letcher County at Seco, the son of Benjamin Franklin Gish, a coal miner and mine manager, and his wife, Ora Lucille Thomas Gish. He attended Letcher County schools and the University of Kentucky, where he met Patricia Ann Burnett, a native of Paris, Kentucky.

After graduating, Tom and Pat went to work as reporters — Pat for the Lexington Leader and Tom for the United Press, covering state government in Frankfort. They were married on April 3, 1948.

Tom wanted to return to Eastern Kentucky. The opportunity arose in 1956 when Pearl and Martha Nolan of Neon, the then-owners of The Mountain Eagle, decided to put the newspaper — founded in 1907 by Nehemiah Webb — up for sale. Tom and Pat became the Eagle’s owners on January 1, 1957.

Under its prior ownership the paper had carefully avoided controversy, and its motto was "A Friendly Non-Partisan Weekly Newspaper Published Every Thursday." Rummaging through old volumes, Tom and Pat found that the paper’s motto had once been "It Screams!" They restored that motto to the masthead.

Many years later, when they were being interviewed by Studs Terkel, the legendary chronicler of American life, Tom and Pat laughed at the notion that they had come to Whitesburg to be crusading journalists.

"We could have been an establishment paper," Tom told Terkel. "We sometimes wonder what would have happened had the establishment, instead of opposing us, coopted and embraced us."

It didn’t. Letcher County in those days was still dominated by the coal industry, and most of the towns had been company towns until recently. Tom and Pat assumed that meetings of the fiscal court and the school board were open to the public. They were wrong.

An early controversy arose when the fiscal court decided, without public input or discussion, to abandon the county library. "The remarks that were made were pretty stupid," Tom later recalled, "and we quoted ’em."

The county officials were not pleased. As Tom noted: "To say something is one thing, but to see it in print is something else."

Tom and Pat soon found themselves struggling on many fronts. A flood devastated the county in 1957. Then the coal industry all but collapsed. Mines that had been working three days a week in 1958 were down to one day, or less, by 1961.

A turning point came when a diabetic woman made her way into the office, begging for the money she needed to pay for having her legs amputated. From then on, in addition to putting out the paper every week, Tom and Pat spent much of their time contacting reporters and government officials, insisting that the rest of the world needed to know what was going on in eastern Kentucky.

They had some success. In 1963, the New York Times sent Pulitzer Prize-winning reporter Homer Bigart to Appalachia. Visiting Letcher County, he spent time with Harry Caudill, whose book, Night Comes to the Cumberlands, had just been published, and used the Eagle office as his base. Tom and Pat told Bigart about the county’s nearstarvation cases.

"At first he was skeptical," Tom later recalled. "He was the kind of reporter who wouldn’t believe anything until he’d seen it with his own eyes. So he went out and talked to people all over the county, and then he came back to the office and told us that everything we’d said was absolutely true. If anything, he said, we’d understated the problem."

Bigart’s front-page articles caught the attention of President Kennedy. Soon there was talk of a federal program to fight poverty and promote economic development throughout Appalachia. Then came Kennedy’s assassination. Within months, President Johnson announced an "unconditional" war on poverty. But the program, although ambitious, never fulfilled its promise, and the Eagle frequently called for more action.

By the 1970s, Tom and Pat had amassed a long list of concerns. Aided by young writers and photographers who made their way to Whitesburg after hearing about the Eagle — and who stayed to help publish it, mostly without pay — they reported and wrote editorials about unregulated stripmining, underperforming schools, the shortcomings of the poverty war and other federal programs, corruption in local government, unsafe mines and black lung.

It wasn’t all bad news. Week after week, the Eagle’s local correspondents faithfully reported on the comings and goings of their communities — births, marriages, deaths, visits, gardens. The paper had many friends. But Tom and Pat had also made many enemies. And in 1972, at the age of 46, Tom had a heart attack.

He was among the first patients in the United States to undergo coronary artery bypass surgery, a procedure then considered highly experimental. As he would say many years — and illnesses — later, "I’m still here. There must be a reason."

Actually there were six.

Tom was devoted to Pat. And he was devoted to their five children — Ann, Sarah, Ben, Kitty and Ray. All of them were as at home at the Eagle as they were at home. As Tom would ruefully say, that was because their parents practically lived at the office. But he was proud of his children for helping out at the paper.

He worried, too, that something bad might happen to them, because so many people in town were so hostile to the Eagle.

But the attack, when it came, was against the Eagle itself.

On August 1, 1974, the Eagle was firebombed. Although the fire did not destroy the building, much of the paper’s equipment and most of its files were destroyed or badly damaged by fire, smoke, and water.

Tom and Pat got out the next issue at home, setting up shop in their living room and on the front porch.

And they changed the paper’s motto to: "It Still Screams!"

Thirty-four years later, it still does.

Some things haven’t changed much. The paper is still grounded in local news. "Speak Your Piece" is a popular feature, providing anyone and everyone a chance to comment, favorably or otherwise, on just about any topic (subject only to editorial discretion).

The Eagle still tackles injustice, whether it’s a bad war abroad or the return of closeddoor meetings in the county seat. It covers car crashes and drugrelated crimes. The front page often focuses on matters related to Letcher County’s operational challenges, such as the news that a sewage treatment plant is behind schedule and that garbage-collection rates may be going up. Inside, the Eagle’s editorial and op-ed pages carry a broader range of views (although none of them, truth to tell, deeply conservative) than many big-city papers. At bottom, the Eagle works as hard as ever at meeting the information needs of Letcher County.

But some things have changed.

A few years ago, Tom and Pat stepped back and turned over the editor’s chair to son Ben. Their son-in-law Freddy Oakes handles advertising and much of the production of each week’s paper; granddaughter Sally Barto is a reporter.

The year 1974 was a turning point for Tom, and not just because of the arson (later traced to a rogue Whitesburg city policeman, bankrolled by coal operators). It was only a few months later when Tom and Pat learned that the state would be taking their home, which was in the path of the new highway-plus-bypass coming to Whitesburg. With the compensation they received, they were able to purchase a beautiful piece of land at Thornton, and soon they moved into a comfortable home designed for them by architect friends.

It’s there that Tom in recent years found himself spending less time at the keyboard and more time in the garden. As visitors could attest, he hadn’t lost any of his lifelong insistence on trying to make a better world. But that was balanced by making raspberry jam, the best jam in the world, from the berries he planted and cared for. He still liked to talk long into the night about the future of the country he loved so much, but he also liked to talk about Mozart.

This year, in April, Tom and Pat celebrated their 60th wedding anniversary. "I’m crazy about my bride," Tom said to a visitor, and he was obviously speaking the truth, as he always did.

Tom’s death was widely reported in the media. He was "rural America’s best journalist," as one headline put it. At his funeral service, the Rev. Jerry Utt, pastor of Graham Memorial Presbyterian Church called him a prophet and said, "The hills were in his soul and in his spirit. How could he not speak out for those who had no voice?" Reporters noted that The Mountain Eagle, having survived everything from arson to advertising boycotts, still screams.

And so it does. But just now it is silent, in grief.

Tom’s funeral was arranged by Letcher Funeral Home of Whitesburg.