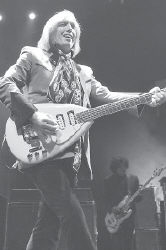 Tom Petty says he’s not much of a football fan, but playing the Super Bowl halftime show was an offer he couldn’t refuse.

“The most significant thing about it is the people watching worldwide … it’s probably the biggest audience you can have I would imagine,” the 57-year-old singer told The Associated Press.

“It’s quite an honor to be asked, if you look at the people who have done it, it’s a very elite crowd … it’s a great opportunity to play for the whole world at once,” Petty said.

Tickets for Tom Petty & the Heartbreakers’ North American tour go on sale the day after their Feb. 3 performance at the Super Bowl halftime in Glendale, Ariz. Steve Winwood is slated to be the special opening act.

The tour will stop in Cincinnati on Tuesday, July 8 at Riverbend Music Center. Other stops near the region include Indianapolis (July 3) and Charlotte, N.C. (July 11). Ticket pre-sales began today (Jan. 30).

The band last went on tour in 2006. Back then, Petty told the AP that it could be their last. But, Petty said recently, “The band wants to go really bad, so we had a meeting about it, and we decided, why not? … We’re doing a shorter tour that we did the last time.”

This tour will be “drastically different in content,” Petty said.

“I would like to see a set list that changed every night. I think it’s more fun. It’s harder on the production people,” he laughed.

While there’s no new Heartbreakers album on the horizon, Petty just finished a disc with his pre-Heartbreakers band, Mudcrutch.

“We just thought it would be fun; we’ve stayed in touch over the years,” he said. “It went far better than expected. … it was so much fun that it should be illegal.”

When asked if fans of Mudcrutch would find the music similar to what they remembered, Petty said with a laugh: “I think in content it’s very similar back in the ’70s, but I don’t know if there are any fans of the band!”