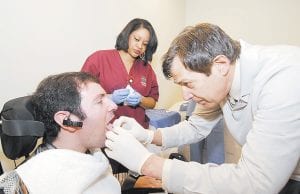 Jason DiSanto, left, receives a tongue piercing at Georgia Tech in Atlanta. An experimental device is letting paralyzed people drive wheelchairs simply by flicking their tongue in the right direction. The Tongue Drive System was developed at Georgia Tech and tested at Shepherd Center in Atlanta. (AP Photo/Georgia Tech)

An experimental device is letting paralyzed people drive wheelchairs simply by flicking their tongue in the right direction.

Key to this wireless system: Users get their tongue pierced with a magnetic stud that resembles jewelry and acts like a joystick, in hopes of offering them more mobility and independence.

Researchers reported Wednesday that 11 people paralyzed from the neck down rapidly learned to use the tongue device to pilot their wheelchairs through an obstacle course full of twists and turns, and to operate a computer, too.

“It’s really powerful because it’s so intuitive,” said Jason DiSanto, 39, of Atlanta, who was among the first spinal cord-injured patients to get his tongue pierced for science and try out the system. “The first time I did it, people thought I was driving for, like, years.”

The team of researchers in Atlanta and Chicago put the Tongue Drive System to the test against one of the most widely used assistive technologies, called sip-and-puff, that users operate by breathing into a straw. Using the tongue, patients operated their wheelchairs a bit faster but just as accurately — and on average, they performed about three times better on video game-like computer tests, said lead researcher Maysam Ghovanloo, director of Georgia Tech’s bionics lab.

The research, reported in the journal Science Translational Medicine, is an early step that allowed use of the device only inside laboratories. Larger studies in real-world conditions are required before the device ever could be sold. And the tongue piercing may be a turn-off for some potential users, the researchers acknowledge.

But the work is attracting attention from specialists who say there’s a big need for more assistive technologies so they can customize care for the severely disabled.

“For people who have very limited ability to control a power wheelchair, there aren’t that many options,” said Dr. Brad Dicianno, a rehabilitation specialist at the University of Pittsburgh Medical Center who wasn’t involved with the new research. “There is some interesting promise for this tongue control.”

Here’s how the system works: A headset detects the tongue’s position when the user flicks that magnetic stud. Touch a spot on the right bottom tooth to go right, for example. The headset wirelessly beams that information to a smartphone the user carries. An app then sends the command to move the wheelchair or the computer cursor.

Why the tongue? “It’s unobstrusive, easy to use and flexible,” said Ghovanloo, a biomedical engineer who created the system and has started a company that is working with Georgia Tech to commercialize it.

Most people with spinal cord injuries — or neurologic diseases that also can paralyze — still can move the tongue. It doesn’t require special concentration. The tongue is pretty tireless. And the amount of real estate the brain’s motor cortex dedicates to the tongue and mouth rivals that of the fingers and hand, offering multiple complex movements, Ghovanloo said. He led the team of researchers from Atlanta’s Shepherd Center for spinal injuries, the Rehabilitation Institute of Chicago and Northwestern University.

DiSanto, an electrical engineer who became paralyzed from the neck down in a 2009 diving accident, said the headset is less intrusive than the sip-and-puff device that he normally uses, which requires a straw-like tube to be worn in front of his face. More important, he said, the tongue drive gave him more control, allowing him to move diagonally, for example.

As for the piercing, “there is some getting used to it,” said DiSanto, who got his in 2011. It took about a week to heal, and speaking and eating felt funny initially but he got used to the sensation.

It’s not for everyone. The current study tested the device in 23 able-bodied participants and 11 paralyzed volunteers. By study’s end, all of the disabled volunteers preferred the tongue system to their regular assistive device, said co-author Joy Bruce, who heads the Shepherd Center’s spinal cord injury lab. But patients who were older or worried that a tongue stud wasn’t acceptable in their profession decided against participating.

Ten other patients signed up but dropped out. One had the piercing fall out, researchers reported, while others had problems finding transportation to the study site, unrelated medical issues or lost interest.

Ghovanloo plans to add functions to the smartphone app to let users turn on the TV or the lights with a flick of the tongue, too. He’s also made the device less visible — putting the headset’s sensors on a dental retainer instead. Studies begin soon to tell if that approach works without compromising users’ speech.

DiSanto has signed up for that next round of testing.

“Somebody that’s in a wheelchair already has a stigma,” he said. “If there was something that could be developed to control my wheelchair and the environment around me, to make me more independent without having to have medical devices coming out of my mouth, it would be a huge benefit.”