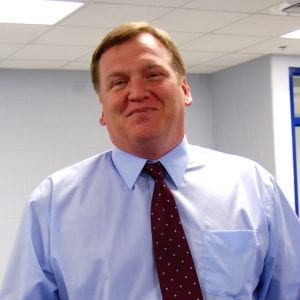 Sergent, a former Letcher County Central High School teacher who is now serving as the school district’s director of Continuous Instructional Improvement Technology System, will begin a four-year contract as superintendent on July 1.

Sergent, who is also a former head football coach at the old Whitesburg High School, will be paid an annual salary of $99,112.

“I’m honored that the board chose me for this position,” Sergent said after the board announced his hiring during a special meeting. “I will work as hard as I can for this district.”

Sergent told The Mountain Eagle that improving student achievement will be his top priority.

The board officially voted to hire Sergent after members emerged from a closed session that began at 6:03 p.m. and ended at 6:33 p.m. Other than voting to hire Sergent, board members made no comment about him or any of the other six candidates who were recommended for consideration for the job by a special screening committee. A total of 31 men and women had applied for the position.

While the school board declined to release the names of any of the applicants for the job, The Mountain Eagle was able to learn that Sergent was one of two candidates interviewed for the position on May 31. The other was Sandy Hogg, the school district’s director of special projects. Hogg also attended Wednesday night’s meeting.