Too much flouride spotting teeth 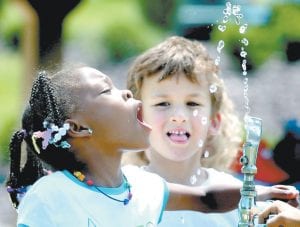 Kindergarten students drink from a fountain in Danville, Pa., in this file photo. Fluoride in drinking water, credited with dramatically cutting cavities and tooth decay, may now be too much of a good thing. (AP Photo)

In a remarkable turnabout, federal health offi cials say many Americans are now getting too much fluoride because of its presence not just in drinking water but in toothpaste, mouthwash and other products, and it’s causing splotches on children’s teeth and perhaps more serious problems.

The U.S. Department of Health and Human Services has announced plans to lower the recommended level of fluoride in drinking water for the first time in nearly 50 years, based on a fresh review of the science.

The announcement is likely to renew the battle over fluoridation, even though the addition of fluoride to drinking water is considered one of the greatest public health successes of the 20th century. The U.S. prevalence of decay in at least one tooth among teens has declined from about 90 percent to 60 percent.

The government first began urging municipal water systems to add fluoride in the early 1950s. Since then, it has been put in toothpaste and mouthwash. It is also in a lot of bottled water and in soda. Some kids even take fluoride supplements. Now, young children may be getting too much.

“Like anything else, you can have too much of a good thing,” said Dr. Howard

Pollick, a professor at the University of California, San Francisco’s dental school and spokesman for the American Dental Association.

One reason behind the change: About 2 out of 5 adolescents have tooth streaking or spottiness because of too much fluoride, a government study found recently. In extreme cases, teeth can be pitted by the mineral — though many cases are so mild only dentists notice it. The problem is generally considered cosmetic and not a reason for serious concern.

The splotchy tooth condition, fluorosis, is unexpectedly common in youngsters ages 12 through 15 and appears to have grown more common since the 1980s, according to the Centers for Disease Control and Prevention.

But there are also growing worries about more serious dangers from fluoride.

The Environmental Protection Agency released two new reviews of research on fluoride Friday. One of the studies found that prolonged, high intake of fluoride can increase the risk of brittle bones, fractures and crippling bone abnormalities.

Critics of fluoridated water seized on the proposed change Friday to renew their attacks on it — a battle that dates back to at least the Cold War 1950s, when it was denounced by some as a step toward Communism. Many activists nowadays don’t think fluoride is essential, and they praised the government’s new steps.

“Anybody who was antifluoride was considered crazy,” said Deborah Catrow, who successfully fought a ballot proposal in 2005 that would have added fluoride to drinking water in Springfield, Ohio. “It’s amazing that people have been so convinced that this is an OK thing to do.”

“This change is necessary because Americans have access to more sources of fluoride than they did when water fluoridation was first introduced,” Dr. O. Marion Burton, president of the American Academy of Pediatrics, said in a statement.

The fluoridated water standard since 1962 has been a range of 0.7 parts per million for warmer climates where people used to drink more water to 1.2 parts per million in cooler regions. The new proposal from HHS would set the recommended level at just 0.7. Meanwhile, the EPA said it is reviewing whether to lower the maximum allowable level of fluoride in drinking water from the current 4 parts per million.

“EPA’s new analysis will help us make sure that people benefit from tooth decay prevention while at the same time avoiding the unwanted health effects from too much fluoride,” said Peter Silva, an EPA assistant administrator.

Fluoride is a mineral that exists in water and soil. About 70 years ago, scientists discovered that people whose supplies naturally had more fluoride also had fewer cavities.

In 1945, Grand Rapids, Mich., became the world’s first city to add fluoride to its drinking water. Six years later a study found a dramatic decline in tooth decay among children there, and the surgeon general endorsed water fluoridation.

And in 1955, Procter & Gamble Co. marketed the first fluoride toothpaste, Crest, with the slogan “Look, Mom, no cavities!”