Too young for promotion board? 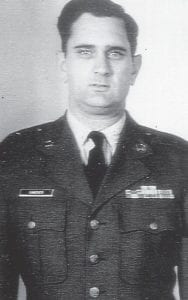 Everett Vanover is pictured in the 1960s when he served on an Air Force promotion board.

I always thought the person with the most time in grade and services should be at the top of the list.

I soon learned from the old timers that served on promotion boards for years that was not a good policy.

During my first couple of promotion boards, I wanted to make sure my people whom I recommended for promotion would be promoted. The old times informed me that promotions were not automatic. To be promoted to the next rank requires supervisor recommendation and commander approval, which my people had.

These board members knew that my printers and I did all printing for their departments. They also knew my men were the hardest and best workers in our headquarters.

All my men and women knew when they showed their abilities to perform at the next higher grade, I recommended them for promotion. It was a reward for their hard work, dedication, discipline and sacrifice.

It was a surprise to me as a young supervisor that most of these old timers agreed to promote my people, even though some of them did not have as much time in grade and service as others who were recommended.

The big joke was after I had served on the promotion board a couple of years, the first thing some of the members would say to me was, “Okay, Van, who are we going to promote today?”

It always helped at promotion time to know we had one of the best printing departments in the Air Force.