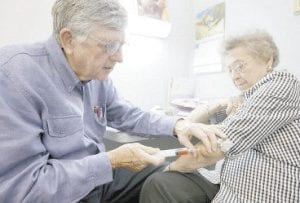 Dr. David Watson, left, drained the elbow of Dorothy Dean, 83, recently in Yoakum, Texas. Watson is the 2008 Country Doctor of the Year, presented by Staff Care. Like country doctors and house calls, family practitioners are a disappearing breed. (AP Photo)

In this sleepy country town, which sprang up around a railroad junction and the start of the Chisholm trail, folks give out their phone numbers by the last four digits, the annual Tom-Tom festival culminates with the crowning of the Tomato King and Queen, and everybody knows Doc Watson.

Over the last 50 years, the tall and lanky family practitioner delivered a good many of the town’s residents and doctored most of the others.

The night Janet Jaco’s little girl had to be rushed to the hospital with a sudden hemorrhage, David Watson walked the four blocks from his house to the Yoakum Community Hospital every hour on the hour to check on his patient and offer a comforting shoulder to her worried mother.

The night the hospital urgently needed blood for an obstetrics patient, Watson rushed down from his office to donate some of his O-negative, then stayed to call in other townspeople with the right blood type. (He knew who they were.)

The day after a torrential rainfall, Bernice Watson remembers, her husband did not let flooded roads stop him from getting to an ailing neighbor. He just hopped aboard a tractor, one arm around the driver, the other clutching his battered leather doctor’s bag.

This month, Watson received the Country Doctor of the Year award, which honors a primary care physician who best exemplifies the spirit of rural practitioners. The award is given out by Staff Care, the largest physician staffing service in the country, which hopes to attract more young doctors to family practice.

“I never wanted to be anything other than a family doctor,” Watson said as he sat in the hospital cafeteria on a recent December day. Pork chops and chicken fried steak (“good home cooking,” noted Watson) were on the menu, a reminder of the smalltown atmosphere that drew the Baylor College of Medicine graduate to Yoakum in 1958.

The doctor’s bag he brought with him is now frayed at the seams and tattooed with scratches and stains, the scars of countless moments of birth, death and recovery. In the process he has gotten to know several generations of patients in this town of 6,000 about 100 miles east of San Antonio.

“He’s always right there when you need him,” said Karen Barber, CEO of the Yoakum Community Hospital, where a wing is named after Watson. “There’s never a second thought for him. He just does what needs to be done.”

Like country doctors and house calls, family practitioners are a disappearing breed. In 1998, half of the medical graduates in the U.S. went into primary care. In 2006, that number had dropped to 38 percent. Most graduates now prefer to go into higher-paying specialties like dermatology or anesthesiology.

That never appealed to Watson, who grew up the son of a Methodist minister in eastern Texas.

He began his practice charging $3 for office visits and $5 for house calls, but he often accepted other kinds of payment including homemade pies, fresh vegetables, deer meat and sausages. One grateful patient gave Watson, a hardcore golfer, one of her husband’s old 2-irons. It still sits in a corner of his office.

As a teenager, his oldest daughter, Debbie Austin, once chastised her father for letting patients pay with produce and baked goods. His response: “These people have paid me with what they could. As far as I’m concerned, they’re paid in full.”

“I remember feeling like I got a big lecture without being yelled at,” Austin recalled. “My dad really is a doctor, a true doctor.”

Like his doctor’s satchel, Watson has been weathered by time, his hair gone to silver, his posture slightly stooped. But his commitment to the town of Yoakum, and the practice of family medicine remains undimmed.

At 78, he still sees up to 30 patients a day at the Yoakum Medical Clinic, the office where he has worked for half a century. He visits another 30 patients during daily rounds at the hospital and a local nursing home, treats children at the Bluebonnet Youth Ranch and continues to make house calls.

“He made me feel like I had a friend. He was so sweet and attentive,” said Jaco, the director of the Youth Ranch, whose daughter recovered from her middle-of-the-night emergency and is now grown and married. “I remember thinking: What other doctor would do this?”

Inside the small brick medical clinic, furnished with oldfashioned mint-green metal medicine cabinets, Watson greets his patients like old friends, asking about their families and their hobbies as well as their health. He carefully reads through their medical files, still kept in brown folders. No computerized recordkeeping here.

“Lou used to run the golf shop,” Watson says, as he examines 80-year-old Lou Olsovsky, who suffers from diabetes and uses a walker. “He’s on a bunch of pills, but he’s still with us.”

He places a stethoscope to Olsovsky’s chest. “You lost your wife four years ago?” Watson asks. “You’re ready to go meet her, aren’t you? You’re tired of pills.”

“I was supposed to go first, but she wouldn’t let me,” says Olsovsky, who still wears his wedding ring.

Blood pressure good. Blood sugar good. No swelling in the legs. Olsovsky can come back in two months for his next checkup.

“If you ever want to come to the golf course, let me know,” Watson says, patting his patient gently on the shoulder. “I’ll come pick you up.”

Watson drops Olsovsky’s chart into a plastic slot and heads to the next examining room. He’s doing what he loves, and has no plans to slow down.

“When I can’t do crossword puzzles anymore, I’ll know it’s time to quit,” he said. “But as long as I’m reasonably healthy, and have a little sense, I’ll keep doing it.”