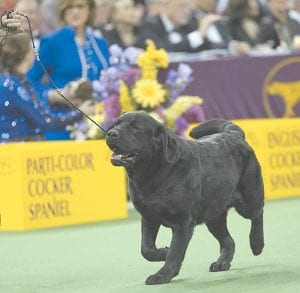 A labrador retriever pointer is shown in the ring during the sporting group competition at the 140th Westminster Kennel Club dog show last week at Madison Square Garden in New York. (AP Photo)

Labrador retrievers still reign supreme after a quarter century as America’s most prevalent purebred dog. But French bulldogs are riding their je ne sais quoi toward new heights, and some lesser known breeds are climbing the popularity ladder, according to American Kennel Club rankings released this week. Here’s a look at how breeds stack up:

Known for being easygoing, multi-talented and friendly, Labs have held the top spot for longer than any other breed since the AKC started counting in the 1880s. Rounding out the top 10 for 2015, in order: German shepherds, golden retrievers, bulldogs, beagles, French bulldogs, Yorkshire terriers, poodles, Rottweilers and boxers.

So what to make of a list that includes both the toy Yorkie and the powerful Rottweiler?

French bulldogs moved from No. 9 to No. 6 last year and became the predominant purebred in Miami and San Francisco, having already conquered New York City. The droll little bat-eared bulldogs last peaked at No. 6 during the 1910s. They weren’t even top 50 as recently as 2002, but TV shows, movies and celebrity owners, including Martha Stewart, Hugh Jackman and Carrie Fisher, have helped spur their renaissance.

Some other movers that aren’t as visible, at least for now: the Cane Corso, an imposing Italian guard dog that rose from 47th in 2014 to 35th last year, and the Norwegian elk hound, a stalwart hunting dog that’s up from 100th to 88th.

What About Winning Breed at Westminster?

Winning the televised Westminster Kennel Club dog show can give a breed a bump. Last week’s best-in-show champ, CJ, is a German short haired pointer — a breed already quite popular at No. 11.

Will Another Dog Get Its Day?

Faves can hold their own for years but do shift over time. Dachshunds and shih tzus dropped out of the top 10 within the last five years. Boston terriers, cocker spaniels, and St. Bernards were No. 1 in decades past but aren’t in the top 20 now.

What’s In A Ranking?

The stats reflect puppies and other newly registered dogs; the AKC doesn’t release raw numbers, only rankings. They don’t include mixed-breed dogs (or hybrids such as Labradoodles and maltipoos that aren’t AKC recognized breeds).

Some animal-rights advocates feel the pursuit of purebreds fuels puppy mills and makes it harder to find homes for mixed-breeds in shelters. The AKC says breed characteristics help people find the right dog to give a permanent home.

Who’s The Rarest Of Them All?

The English foxhound is the rarest of the AKC’s 184 recognized breeds. And most of us aren’t likely to run into a harrier, a Norwegian Lundehund, an American foxhound or an otter hound any time soon.

Popularity rises and falls on many factors, and trends can be self-perpetuating

— the scarcer the breed, the fewer the puppies, and vice versa, DiNardo notes. She encourages would-be dog owners to consider both rare and familiar ones.

“ You may want to be one of those people who helps protect and preserve a breed,” she said.