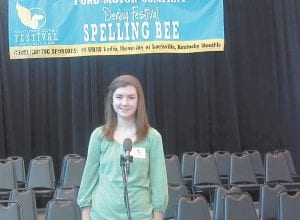 For placing fourth out of 65 students in the state spelling bee, Saurer, a seventh grader at Whitesburg Middle School, received a trophy, a $1,500 savings bond and a $25 Amazon gift card.

“It was awesome,” she said. “My hard work paid off. Plus, it is an opportunity to earn college money.”

“It was an honor,” she said. “I was thrilled as I realized the number of students remaining was under 10 and I truly had a chance at top five, which was my goal.”

She downloaded a dictionary app to her smart phone and studies with the app as well as on her computer. She also studied the state spelling bee guide.

“And my mom helped me, too,” said Saurer. “It’s fun and just comes naturally for me.

Next year will be her last chance to compete in the state spelling bee, which is for students in fourth grade through eighth grade.

Saurer wants to work with other students and share what she has learned about the spelling bee process.

“The goal is to spread the word about possible college funds and encourage students to participate,” said Valerie Saurer, Brooke Saurer’s mother.

Saurer, the daughter of James and Valerie Saurer of Partridge, is the president of the 4-H Junior Teen Council, and a member of the Whitesburg Middle School Band and Letcher County Central High School Marching Band/Pep Band, Girl Scouts, WMS Yearbook staff and academic team.

Emily Keaton, 13, of Pikeville, won the state spelling bee for the fourth year in a row. Keaton won a $10,000 savings bond.