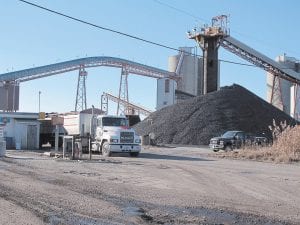 The Crown III underground coal mine near Farmersville, Ill. ceased operations last month costing nearly 200 workers their jobs after the mine lost its contract with agribusiness giant Archer Daniels Midland Co. However, the future looks bright for other mines in the Illinois Basin, which includes western Kentucky. (AP Photo)

The Wall Street Journal, the largest newspaper in the U.S. and one with special emphasis on business and economic news, has devoted a lot of time and space recently to the coal industry in a series of reports entitled “The Future of Coal.” Here is some of what the newspaper found:

The unexpected comeback story in the U.S. coal industry is the Illinois Basin, which includes western Kentucky.

The area had been one of the four major U.S. coal basins — along with Wyoming and Northern and Central Appalachia — but became less popular with the passage of the Clean Air Act in 1970. Illinois coal contains high amounts of sulfur, which contributes to acid rain.

Now the spread of scrubbing technology, which can remove 97% of a coal-fired power plant’s sulfur dioxide, has put Illinois coal back in play.

As power plants installed scrubbers, coal companies reopened mines over the last decade. The state of Illinois was expected to produce 56 million tons of coal last year, up 70% from 2010, according to the Energy Information Administration. Two western Kentucky counties — Hopkins and Union — are now the state’s top two coal producers.

Peabody Energy Corp., the largest U.S. coal producer, says it produces 30 million tons of coal a year in the Illinois Basin, up from 10 million tons five years ago.

“Now that scrubbers are being put in, Illinois is the low-cost and more-attractive coal,” says Jim Thompson, an analyst with IHS Global Insight.

Coal production fell 7% overall in the U.S. in 2012 but rose 10% in the Illinois Basin. Its output is expected to surpass that of Central Appalachia by the end of the decade, according to the EIA.

The basin, which stretches from Illinois into Missouri, Indiana and western Kentucky, is near railroads, the Mississippi River and other transportation options, offering opportunities even for startups.

Sunrise Coal LLC was founded in 2002. The company, now a subsidiary of Hallador Energy Co. produces three million tons a year at a mine in Carlisle, Ind., and is opening two mines in the Illinois Basin.

When Sunrise built its underground mine in Carlisle in 2005, the company did its own digging. Bids submitted by contractors were around $15 million, but Sunrise did the work for $4.5 million, says company President Brent Bilsland. “We mixed our own concrete. We set arches by hand.”

Mr. Bilsland says Sunrise’s nonunion workers earn an average of $75,000 a year and get health and retirement benefits. Only 6% of Illinois Basin miners belong to the United Mine Workers union, compared with 27% of workers in West Virginia. The union lost about 20,000 members in the 1990s as mines shut down amid restrictions on sulfur emissions.

Sunrise continues to scout the Illinois Basin. “We’re constantly drilling and leasing and looking for new coal,” Mr. Bilsland says. “If I can find a reserve that’s right next to a power plant and has good mining characteristics, I’ll mine.”

Sunrise ships its coal to utilities in Florida and Indiana, and Mr. Bilsland has his eye on sales to China.

“I think you’ll see a lot of Illinois Basin coal floating down the Mississippi,” he says.

At the southeastern tip of Louisiana, barges piled high with coal reach the end of a long trip down the Mississippi River on its way overseas.

It’s a journey that is becoming more common.

The U.S. typically has been one of the top exporters of metallurgical coal, which is used to make steel, most of it mined in Appalachia and shipped from the East Coast.

Now some people in the industry anticipate that the U.S. will become an increasingly significant global supplier of steam coal, which is used to generate electricity. With the domestic market for U.S. steam coal crimped by new environmental rules and competition from natural gas, producers are finding new markets abroad.

Much U.S. steam coal is mined in the Midwest, driving investment in coal-export facilities at Gulf of Mexico ports to meet overseas demand.

United Bulk Terminals bought its Davant, La., terminal in 2011 and is investing about $80 million to upgrade it. The company, a division of Germany’s Oiltanking Group, says the work will nearly double the terminal’s export capacity to 22 million tons a year.

The Port of New Orleans exported 17.6 million metric tons of steam coal in 2012, a sixfold increase over the low point in 2009, according to the U.S. Commerce Department. The commodity, also known as thermal coal, mostly was shipped to Europe, but also sailed to South America and even as far as Asia.

Analysts predict coal exports will show a drop for last year as lower prices globally made it harder for U.S. coal to compete overseas.

And some companies are having second thoughts about expanding in the Gulf Coast. Ambre Energy Ltd. pulled out of a lease at the port of Corpus Christi, Texas, where the Australian company had planned to develop a coal-export terminal. The company plans to look instead at the Pacific Northwest, from which Wyoming coal could be shipped.

But analysts say the Gulf still is poised to be an outlet for a likely increase in production and exports of Midwestern coal, especially once vessels can reach Asia more quickly through an expanded Panama Canal, due for next year.

Unlike the Pacific Northwest, where proposed coal terminals have encountered stiff opposition and difficulty getting permits, ports such as New Orleans offer relatively unconstrained growth potential, says Stifel analyst Paul Forward. “I think that’s what we can probably count on going forward—a gradual increased role for the U.S. as an exporter,” he says.

A subsidiary of Dutch commodities trader Trafigura Beheer BV says about 7.5 million metric tons of coal will be able to pass through its Burnside, La., terminal when it completes the first phase of an expansion this year.

And Houston-based Kinder Morgan Energy Partners LP, which has shipping agreements with coal producers Arch Coal Inc. and Peabody Energy Corp., soon will have the capacity to ship about 25 million metric tons of coal from terminals in Texas and Louisiana.