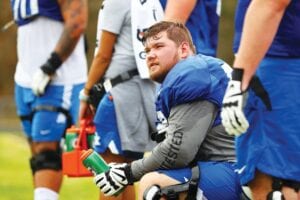 Senior center Drake Jackson says despite the praise the UK offensive line has received the players know they can still get a lot better. (Vicky Graff photo)

Don’t look for point guard Kennedy Chandler to be a player that will let his recruiting process drag out during his senior season.

The 6-1 Chandler is the top-rated point guard in the 2021 recruiting class. He has narrowed his college choices to Kentucky, Tennessee, Memphis, Duke and North Carolina.

“I know when I talked to his parents over the winter they wanted him to finish his high school season, narrow down his choices and then starting focusing on schools he could see himself at and not dragging on with schools who didn’t have a chance to get him so he could make his college choice,” Krysten Peek, a writer for Rivals.com and Yahoo Sports. 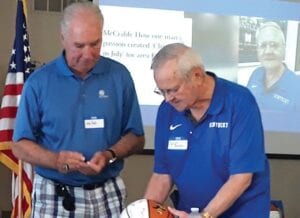 “I spoke to all five schools Kennedy has chosen for his top five and nothing has changed. Our (phone) numbers have not changed. All the coaches have access to him still. The plan is still the same,” Kylan Chandler said.

“It will just be more of a college prep year. He’ll get used to housing and travel, play a national schedule and have opportunities for even more development.

“Briarcrest was a great academic school and he’s been there since second grade. He has a great relationship with the coach and his son and will miss them. But all the guys he won the state title with last year graduated. Most were football players now going to play college ball.”

“I think he has more tools than people realize. Most see him as a playmaker and shifty point guard. But he has hops. He can play above the rim,” Peek said. “He’s a very versatile 6-1 point guard. I remember his first time at USA Basketball and he played with confidence because he knew he belonged because he knows he’s a good player.”

Several prep schools reached out to Chandler about playing for them his senior season but his family’s relationship with the Mokan AAU program, based in Kansas, moved Sunrise to the top of his list.

“We are familiar with the family at Sunrise. He helped them win a Peach Jam title. They know him, he knows them. It’s a great fit for both,” Kylan Chandler said. “He’s ready for the move and the challenge.”

Chandler’s explosive speed could be his biggest attribute. His father says he’s got faster as he got older in part because the footwork drills he’s done along with the way he’s worked with strength coaching and training on his lateral movement.

“When he was younger his athleticism was not like it is now. He’s getting better and is able to go to the hole, take you off the dribble and dunk on you,” Chandler’s father said. “It’s kind of crazy how all of a sudden he hit a spurt and his athleticism took off. It has been a great last year and a half.”

“Just playing against older, stronger guys that think and react quicker is good for him,” Kylan Chandler said. “They all love and respect Kennedy. Morant has given him some really good advice and also really challenged him because Kennedy is not used to playing against guys faster than him.”

Kylan Chandler says there’s a lot for the family to like about Kentucky.

“Great staff, Calipari produces players who get to the next level, style of play is something I really like,” the recruit’s father said. “He lets his guards play. He plays with three guards most of the time. It’s just a great school and they have been recruiting him a long time.”

He admits they hear often from Kentucky fans on social media.

“A lot of Kentucky fans follow Kennedy (on social media) and they are always commenting about him coming to Kentucky,” Kylan Chandler said. “Kennedy is a very humble kid. If you see him play, he’s not emotional. He’s let his game speak for itself. He doesn’t mind interviews and understands that media comes with it and you just answer to the best of your ability. Same with social media.”

His father hopes he’ll pick a school that plays an uptempo style on offense along with an aggressive, man-to-man defense because that’s what fits Kennedy Chandler best.

“He knows any school he picks that he has to go in and compete. He doesn’t want anyone to promise him this or that,” Kylan Chandler said. “He is ready to go at full pace and do what he needs to compete and hopefully start his freshman year. That’s why it (his college choice) is all about the right fit.”

Kentucky’s Big Blue Wall — the offensive line — has become well-known across the Southeastern Conference and returns three of the SEC’s top linemen in center Drake Jackson along with tackles Landon Young and Darian Kinnard.

Jackson, Kinnard and Young blocked for Benny Snell, UK’s all-time leading rusher. They blocked for Lynn Bowden, the surprising star of the SEC last year after he was forced to move from receiver to quarterback.

“I knew we were performing well in 2018 when we went to Florida and ran the ball all over them and won,” Jackson said when asked about the first time he realized how special UK’s offensive line could be.

However, he says offensive line coach John Schlarman never lets the group get satisfied no matter how many wins or accolades come their way.

“He will never let you think you have arrived even after an incredible game,” Jackson said. “He will say something like, ‘You played great but here’s all the stuff you need to fix.’ He never lets you feel like you are the best in the country because he doesn’t want you to stop playing.”

“I won’t lie. I have noticed the attention we have gotten, all the recognition and praise, all the objective stats,” Jackson said. “You really cannot argue with what we have done. It’s all on paper

“We have noticed all that but not felt like we could just let up. We could be so much better. There were some sacks, tackles for losses last year we can fix and will fix this year.”

Mike Pratt didn’t get to see a lot of college basketball games on television growing up in Dayton, Ohio. He does remember a Big Ten Game of the Week on TV each Saturday that normally had just a play-by-play announcer and did get to see a few University of Dayton games on TV, too.

“I really couldn’t tell you who was even doing play-by-play on the games then,” Pratt said.

He came to Kentucky to play for coach Adolph Rupp over 50 years ago and got exposed to more TV personalities.

“I listened to Joe Dean on the SEC Game of the Week. He was very, very good and I really liked him,” Pratt, a former UK All-American who is now the analyst on the UK Radio Network, said.

“As I moved through life I liked Billy Packer, something I know UK fans probably won’t like knowing. But he talked basketball and not BS like a lot of guys. I knew him a little bit (when I was coaching) at North Carolina-Charlotte.”

One other TV college basketball announcer he liked watching was Clark Kellogg.

“He talked basketball and knew what he was talking about when he did a game. He did his homework,” Pratt said. “So there are some people I’ve enjoyed listening to. Others I don’t or just don’t have any feelings and what they say really doesn’t matter to me.”

Of all the memorable games that Kenny Walker played during his All-American career at the University of Kentucky the first one I usually remember is No. 3 UK’s 1984 win over unranked Auburn in the SEC Tournament in Nashville.

It was a defensive slugfest won 51-49 by Kentucky. Person and Barkley both had 14 points for Auburn while Turpin had 13, Walker 12 and Master 10 for Kentucky. Walker was the game’s leading rebounder with nine.

Walker hit the game-winning shot just before the final buzzer and Barkley sat stunned on the court crying after the shot went in.

“I think everybody on our team remembers that game,” UK point guard Roger Harden said.

Walker remembers it well, too.

“It never fails to come up when I am doing a post-game show with Larry Glover (on WVLK). Four or five times a year somebody will call and remember that night in 1984 when I made Charles Barkley cry,” Walker laughed and said.

“I love him and have known him since high school. A lot of UK fans do not like him because he was a bully and talked trash but he could back it up and was fun to play against.

‘He was just a big teddy bear. I mess with him every time I see him now and ask him about remembering Nashville in 1984. Charles is still feeling it after all these years, too. I think it still hurts him and I get that but it also makes me smile every time I see him and think about it.”

Quote of the Week: “My freshman year I didn’t even really know what all-Americans were. I remember getting a phone call from Craig (Skinner) saying I was second team all-American as a freshman and that was pretty cool. Now I am a three-time second team and pumped to get first team this year,” Kentucky senior setter Madison Lilley on her individual goal for her last season.

Quote of the Week 3: “When the game is over with, (we want to) find a way to auction the jerseys and raise money for Black Lives Matter. That is one thing our kids have talked about. There’s lot of really good ideas we can help improve and use our platform to create change,” Tennessee coach Jeremy Pruitt on the Vols wearing black jerseys when they host UK Nov. 7.