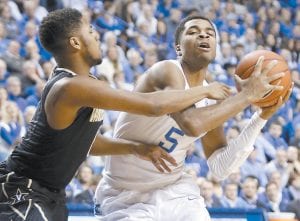 Kentucky twin guards Aaron and Andrew Harrison combined for 11 points down the stretch that were key in helping the top-ranked Wildcats hold off pesky Vanderbilt 65-57 on Tuesday night.

The Wildcats (18-0, 5-0 Southeastern Conference) didn’t lead by double digits until early in the second half, and that 45-33 advantage lasted briefly as the Commodores (11-7, 1-4) began answering from the perimeter to stay within several possessions of Kentucky.

Five combined 3-pointers by Riley LaChance (16 points) and Matthew Fisher-Davis (13) helped Vanderbilt pull within 58-54 with 2:36 left. Aaron Harrison responded with a big shot from long range 27 seconds later, and Andrew Harrison followed with a jumper with 1:07 left to provide some space.

Damian Jones had 11 points and seven rebounds for Vanderbilt, which shot 42 percent in losing its fourth straight and third in a row by a close margin. Fisher- Davis missed a 3-pointer with 15 seconds left and Wade Baldwin IV missed another jumper seconds later that Kentucky’s Willie Cauley- Stein rebounded to seal the game. 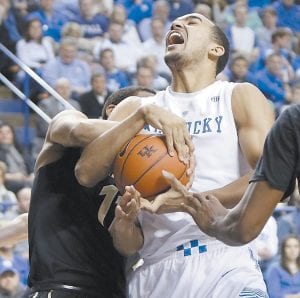 Though the Wildcats led throughout, they were obviously less dominant than in back-toback routs of Missouri and Alabama. Vanderbilt kept that from happening thanks to a steely resolves and 7-of-18 shooting from 3-point range.

Vandy coach Kevin Stallings made sure to keep his players’ spirits up despite the slump, mainly to keep the Wildcats from seizing on an opportunity and rolling to another rout. That was a tall task, considering the Commodores were 22-point underdogs, but they had chances.

Creating a shot was half the battle for the Commodores, who committed two clock violations early on and often launched jumpers as time ran down. One moment was particularly telling, as Cauley-Stein came from behind to smack Fisher-Davis’ 3-pointer out of bounds.

It was one of eight first-half rejections by Kentucky, but the Commodores hung around and trailed just 33-36 at the break because of the Wildcats’ offensive inconsistency. Kentucky still shot 50 percent from the field and made both 3-pointers, needing only to mount some continuity.

Just when the Wildcats seemed to get it, LaChance and Fisher- Davis teamed to snatch the momentum and make it close before the Harrisons chipped in to save the Wildcats.

Both schools extended lengthy streaks of games with at least one 3-pointer. Kentucky’s run is now 918 contests after it made four from behind the arc. Vanderbilt sank seven to extend its run to 914.

Vanderbilt: The Commodores fell to 8-18 against top-ranked teams and 5-13 versus Kentucky as the No. 1 squad. Vandy’s last meeting against the Wildcats as No. 1 was a 71-64 win in the 2012 SEC tournament championship.

Kentucky: Already assured of having the best record among Wildcats coaches in their first 100 home games no matter what, Calipari improved to 96-4 with the tense victory.