Top recruit plans to be ‘fan friendly’ at UK 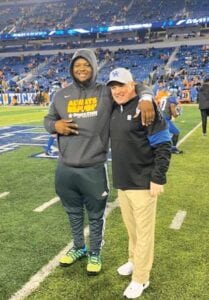 Top Kentucky football recruit Justin Rogers never wavered in his commitment to coach Mark Stoops and UK even when many predicted he would flip his commitment. (Twitter Photo)

Five-star defensive lineman Justin Rogers is the highest rated recruit — he’s a top 20 player nationally — that coach Mark Stoops has signed at UK but he doesn’t want fans thinking he has a superstar mentality.

“I love interacting with fans. They can come and get a photo or I will sign anything. That is my personality. I am a friendly person. People think I am this big, mean guy but I am friendly.”

Or at least off the field the 6-3, 310-pound Oak Park, Mich., standout is friendly. On the field, he’s so dynamic that Alabama, Georgia, Ohio State, Michigan State, Michigan and Tennessee were his other potential college choices after he narrowed down his big list of offers. However, his first scholarship offer came from Kentucky when he was in the eighth grade and he never forgot that. 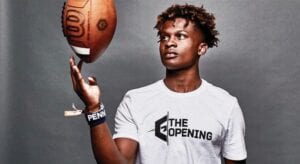 “Every time we see him, whether he’s on campus or when I got a chance to go visit him, he’s one of those guys that puts a smile on your face; he affects other people in such a positive way,” Stoops said. “For such a highly ranked player, he was a joy to recruit. And it says a lot about him and his character.”

Once Rogers finished his high school classes he offered to do media interviews. Someone on Twitter suggested he just do a Zoom conference rather than have to do individual interviews.

“That’s not fair to them. They deserve to each have the own individual quality time with me to really get to know me and that is the same way I feel about getting to know each interviewer,” Rogers replied on Twitter. “I want to build a REAL relationship with each one.”

After I reached out to him, he told me when he would call in a few days and he called at exactly the time he said he would.

“ That’s just the way I was raised,” he said when I complimented him for being so prompt.

Almost as soon as Rogers verbally committed in mid-May of 2019 — seven months before national signing day — speculation started nationally that he would eventually flip to a more traditional football power like Alabama or Georgia if he did leave the state. Instead, he never wavered in his commitment to UK.

“I didn’t really pay attention to all that speculation. I knew where my head was in my commitment,” Rogers said. “Me and the (UK) coaches built a bond. It was already family for real. I was eager to commit because I felt comfortable with everybody there.”

It didn’t hurt that former Oak Park teammate Marquan McCall was already at UK or that linebacker DeAndre Square of Detroit was, too.

“It was just the right fit, so I jumped the gun and committed,” Rogers said. “People were telling me congratulations but also that I might have done it too early but I felt it was the right time. I am ready to go hop on the field now, lace up the cleats and go to work.”

Rogers was that rare high school player who dominated both the offensive and defensive line play. He was considered a better collegiate offensive line prospect by many but the more he heard that, the more determined he was to play defense.

“People were telling me I won’t be that good on defense even in high school, that it’s not a good fit,” he said. “I had to prove to everybody I could play defense and make my mark. I did great and shocked people.

“I love playing both sides of the ball. I can play anywhere. I even played linebacker a couple of games. I just love the game and have for as long as I can remember. That’s why I just played football and nothing else.”

Rogers can remember how happy he was when college coaches started watching him play and never felt the recruiting process was a burden despite the enormous amount of scholarship offers he had.

“Recruiting was hard but for me it was like letting a little kid in the candy store,” Rogers said. “It was so hard to pick the right school but I just felt Kentucky was right. It felt like home and my mom was definitely on board with Kentucky. She loved it when she went down there.”

Rogers, who has been timed in 4.9 seconds in the 40-yard dash, would like to have his weight at 300 pounds when the season starts and knows first-year defensive line coach Anwar Stewart will push to get him there.

“Coach Stewart is a great guy, but he is definitely a character. I can’t wait for him to coach me,” Rogers said. “I am definitely expecting to come in and play. I have a hunger for the game. I want to learn the playbook, make plays and bust my butt for the team.”

Rogers knows UK coaches and fans have seen his highlights but believes seeing him play in person will show a lot more about what he can do.

“I can read the offensive tackle and his body movement. I know what an offensive player will do before he does it,” he said. “I can definitely knock people around if I need to but I can also just beat people off the ball.”

Rogers says he’s done all he can to maintain his fitness but knows he will be “sluggish” when he’s finally allowed to report to UK.

“You can run, jog, do pushups but it will still all be at a different level when I get to Kentucky,” Rogers said. “Still, I’m ready. I can’t wait to get to Lexington. I really liked the downtown area when I was there before. Just walking around, people were so friendly. And I like friendly people because that is how I am.”

“Dekel has a twitch like you are watching a college player playing in the small slot,” Burton said. “You get the ball in his hands and there is no delay from when he catches it until he is running full speed.”

“But Dekel will hit people,” Burton, the state’s top rated junior, said. “He is not the least bit scared. If you cut him off and he can’t juke you, he will just run through you. He’s a pretty well built dude from his work in the weight room.

“Dane and Dekel work out together. They just push each other. Dane pushing him lifting and Dekel pushes more in the running. Dekel overall is one of the hardest working guys I have ever been around.”

Burton, who also has UK among his final choices, is confi- dent Crowdus will be remembered as a special player at Kentucky in the years ahead.

“He could make an immediate impact returning kicks now with his speed or on go routes on third and 20,” Burton said.

“He’s obviously not as good as those guys yet but he has the athletic ability to get to that point,” Burton said. “If he just learns to run crisp college routes, I don’t think anyone will be able to guard him.”

Before Trinity International point guard Dashien Nix of Las Vegas opted to give up his scholarship to UCLA to sign a deal with the G-League, I had a chance to ask him about future Kentucky point guard Devin Askew.

Nix played at the Marshall County Hoopfest and McCracken County Mustang Madness the last two years and he never denied his huge interest in Kentucky even though he never got a Kentucky scholarship offer.

Nix has played against Askew and says he is a “really nice player” that should do well at Kentucky.

“He is a really good point guard. I think he is a great fit for Kentucky and the next recruiting class coming in,” Askew said. “When I played against him, he controlled the game the whole time.

“He has a good pace of play. He makes smarter decisions, less turnovers than me. He’s in control of the game and knows how to make other players around him better. Those guys he’s going to be playing with are really going to enjoy having him.”

Kentucky has eight starters returning on both offense and defense off last year’s team that went 8-5 and also hopes to have Terry Wilson back at quarterback after he missed most of last season with a knee injury.

Pro Football Focus had the Wildcats No. 20 in its early top 25 college football power rankings.

Kentucky should have one of the SEC’s best offensive lines led by Darian Kinnard, Landon Young and Drake Jackson and should also be solid in the defensive line. Linebacker Boogie Watson could be a breakout player and the secondary returns plenty of experience.

And remember UK was able to redshirt every freshman last season and should have the most depth in the Mark Stoops’s era at UK.

“We have a lot of dudes I think that are going to be really good players, including some a lot of people don’t know much about yet,” UK recruiting coordinator Vince Marrow said.

It was no surprise to see outfielder Bailey Vicky of McCracken County named the Southeastern Conference Softball Scholar-Athlete of the Year in what should have been an easy vote for the league coaches (and because of COVID-19 this is the only individual award the SEC will have this season).

When the season ended, Vick was hitting .556 — the second best mark in the nation — and had 35 hits and 33 runs scored, both career highs.

She earned an accounting degree and finished with a 3.9 grade point average and has already accepted a job in finance rather than come back for another season at UK.

“The good thing is I am still rooming with her next year and we move in together in August,” senior pitcher Autumn Humes said. “We had this planned and the lease signed before (COVID-19). So even though I am coming back for another year and she isn’t, I won’t miss much with her because we will be together.

“But not being on the field for her passion and love for softball is what I will miss. I know I won’t see that in our apartment.”

Quote of the Week: “I really think they are going to be elite next year but Virginia, Villanova and other teams are going to be good, too. Kentucky fans do not always realize other guys are pretty good, too, and are trying to win the same national title,” ESPN analyst Seth Greenberg on next year’s UK basketball team.

Quote of the Week 2: “Every morning when I wake up I make my bed. Once I make my bed that is when my plan for the day starts. Getting in a routine is the biggest and most important thing for me to get things done and stay motivated right now,” UK senior softball pitcher Autumn Humes on coping with COVID-19 days.

Quote of the Week 3: “First like to say that we’re sorry that we didn’t meet the meet the high standards that you expect of us. And second of all, I want to say it’s a new day. You will not hear of any behavior such as this going forward,” UK president Eli Capilouto on what he would say to parents of UK cheerleaders after having to fire four cheerleading coaches last week over hazing, drinking and nudity allegations.