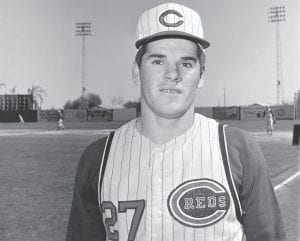 On November 26, 1963 — 51 years ago this week — Cincinnati Reds second baseman Pete Rose was named the National League’s Rookie of the Year. Nicknamed “Charlie Hustle” for his aggressive style, Rose had 171 hits and scored 101 runs while batting .273. He had six homers, 25 doubles and nine triples. (AP)