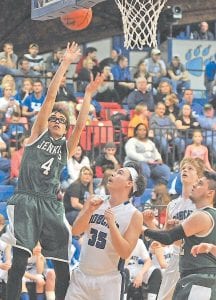 Jenkins junior Matthew Jessey put up a shot in last Friday’s regular season final loss to Betsy Layne. The Cavaliers lost the game 75-36, then fell 65-25 in the opening round of the 53rd District Tournament to Letcher Central on Monday. (Photo by Chris Anderson)

The Cougars will next meet the winner of the June Buchanan/ Knott Central matchup for the district championship.

The Cougars made 25/46 field goal attempts for 54 percent and outrebounded Jenkins 38-27.

LCCHS, now 19-9, struggled in the first half on both ends of the floor. The Cougars trailed 20-19 at the end of the first quarter, but then used junior guard Austin Banks’s outside shooting to take a 34-30 lead at the half.

Banks, who finished with a game-high 23 points, was 8/16 in field goal attempts — including 6/12 from behind the arc. He also claimed seven rebounds and dished off three assists with no turnovers.

LCCHS shook off its lethargy in the third quarter and used an 11-2 run to push the lead to 45-32 in the first three minutes of the third quarter. Back-to-back treys by Banks pushed LCCHS’s lead to 54-36 with 2:22 left in the third, and Torell Carter, Jordan Gregory and Tyler Collins then took a seat on the bench.

After LCCHS made just one of eight free throws, Tyler Collins, who replaced Elijah Raglin who had fouled out with six points, made two free throws with six seconds left to preserve the victory. Collins finished with six points.

The Cougars outrebounded the Eagles 39-33 with Torell Carter claiming a game-high 14 rebounds. Carter finished with 17 points.

The Cougars overcame 22 turnovers with good shooting — making 23/50 field goal attempts for 46 percent. The Cougars were 10/23 from behind the arc for 44 percent but just 17/29 from the charity line for 59 percent.

The visiting Letcher Central Cougars, behind the play of All- State junior Torell Carter, rallied down the stretch for the 57-56 win at Pike Central last Thursday evening.

Letcher Central struggled offensively early and trailed 22-13 after the first quarter and 34-26 at the half before closing the gap in the third quarter and trailing just 46-45 entering the last quarter.

Carter scored the Cougars’ final 12 fourth quarter points — including the go-ahead and winning basket in the final seconds.

Carter made 11/18 field goal attempts and finished with a gamehigh 30 points. Collins chipped in with 13 points and nine rebounds.

The Cougars, who were outrebounded 24-20, made just 12 turnovers while forcing Pike Central into 18 turnovers.

Senior Jordan Gregory and junior Austin Caudill finished with five points each for the 18-9 Cougars. Junior Austin Banks wound up with three points.