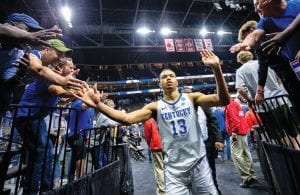 Kentucky’s Jemarl Baker Jr. (13) was greeted by fans as he left the court after helping his team defeat Wofford in a second-round game in the NCAA men’s college basketball tournament in Jacksonville, Fla., over the weekend. (AP Photo)

The path to the Final Four will not be easy for Zion Williamson, Luke Maye, De’Andre Hunter and the other top-seeded stars in the NCAA Tournament.

For the first time in a decade, the remaining tournament field entering the Sweet 16 looks a lot like the one set on Selection Sunday.

The headlining teams are still around after avoiding upsets — some pretty serious scares, too. Hello, Duke! — during an opening weekend that went unusually according to plan. Fourteen of the top 16, including all of the No. 1, 2 and 3 seeds, reached the regional semifinals. The last time that happened was 2009.

The Atlantic Coast, Southeastern and Big Ten conferences gobbled up 12 of the 16 slots, with the ACC having a national-best five teams — led by top seeds Duke, Virginia and North Carolina — followed by the SEC’s four and the Big Ten’s three. 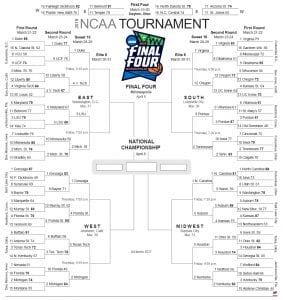 Here is a look at the updated paths in each region to reach the Final Four in Minneapolis:

Duke is the No. 1 overall seed, yet the Blue Devils are fortunate to still be alive after UCF had two shots for the win roll off the rim in the final seconds Sunday.

“We had a lot of foul trouble, and we are young, and we’re not deep,” Duke coach Mike Krzyzewski said, “but we’re good.”

And now the Blue Devils (31-5) face a regional bracket in Washington that still has the top four seeds.

Duke faces No. 4 seed and fellow ACC member Virginia Tech (26-8), a rematch from one of Duke’s losses during the nearly six full games that Williamson, the star freshman, was out with a knee injury. Yet the Hokies — in the tournament’s second weekend for the second time in program history — will have point guard Justin Robinson, who missed 12 games with a foot injury and didn’t play in that February win.

Friday’s other semifinal will be No. 2 seed Michigan State (30-6) against No. 3 seed LSU (28-6) — which is still without suspended coach Will Wade amid a federal investigation into corruption within the sport.

The Zags (32-3) had little trouble reaching a national-best fifth straight Sweet 16. Now they find themselves in a familiar sce- nario: playing Florida State in the regional semifinals for the second straight year.

The fourth-seeded Seminoles (29-7) won last year’s meeting and have plenty of confidence after beating Virginia in the ACC Tournament semifinals.

“I thought they were really, really underseeded,” Gonzaga coach Mark Few said, adding: “You have to beat really good teams to advance in this thing. So, we knew we were going to have to play somebody really good, and Florida State is no doubt that.”

Thursday’s other semifinal in Anaheim, California, could be a rugged fight between No. 2 seed Michigan (30-6) and No. 3 seed Texas Tech (28-6). They’re the top two teams in KenPom’s adjusted defensive efficiency ratings, with the Red Raiders first (85.3 points allowed per 100 possessions) followed by the Wolverines (85.8).

Virginia is finally free of its UMBC failure.

The Cavaliers spent the year playing in the shadow of last year’s first-round loss to UMBC, the only 16-vs-1 upset in tournament history. And they were confronted with it again when they trailed No. 16 seed Gardner-Webb by 14 in the first half of Friday’s game.

But Virginia found its steady, defensiveminded form after halftime, then beat Oklahoma to return to the Sweet 16 for the first time since 2016.

“You talk about trying to focus in and then getting down, it was real,” coach Tony Bennett said. “So I think those guys will have that as something they can always draw upon to say we faced a giant and battled through it.”

Now Virginia (31-3) faces No. 12 seed Oregon, the only double-digit seed left in a heavyweight field, in pursuit of its first Final Four trip under Bennett.

Thursday’s other semifinal in Louisville has No. 2 seed Tennessee (31-5) meeting No. 3 seed Purdue (25-9) after eventful secondround games for both.

The Vols survived in overtime against Iowa after blowing a 25-point lead to return to the Sweet 16 for the first time since 2014. As for the Boilermakers, Carsen Edwards had a career-best 42 points in a rout of 2018 champion Villanova.

Top-seeded North Carolina (29-6) leads a bracket that nearly went chalk, with No. 5 seed Auburn joining Oregon as the only surviving teams from outside the top 16 seeds.

Yet the biggest question surrounding Friday’s games in Kansas City hovers around No. 2 seed Kentucky and PJ Washington. The Wildcats’ leading scorer and rebounder missed the first two NCAA games while wearing a hard cast on his sprained left foot.

“I know this, he really wants to play,” Kentucky coach John Calipari said before a second-round win against Wofford. “But I also want to feel comfortable that if he gets on the court that there’s nothing he can do to himself, and the doctors have pretty much said that. So it’s just, ‘OK, when is it healed enough that he can go?’” e

Th Wildcats (29-6) meet third-seeded Houston (33- 3), which set a school record for wins when they beat Ohio State on Sunday.

In the other semifinal, UNC looks to keep rolling when it faces the Tigers (28- 9) — who peaked at No. 7 in the AP Top 25 in December, fell out of the poll, then had a late-season surge to win the SEC Tournament and blow out Kansas on Saturday.