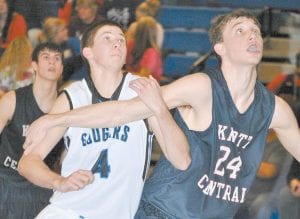 A FIGHT FOR POSITION — Letcher County Central forward Max Hall (4) battled for rebounding position with Knott Central forward Evan Hall (24) during the Patriots’ win over the Cougars in a 53rd District game at Ermine. (Photo by Brandon Meyer/B. Meyer Images)

The Letcher County Central Cougars will finish their regular season against some top-flight competition. LCC travels to highly regarded Breathitt County February 7, then hosts Hazard on Friday. Both teams are ranked in the top five in the 14th Region.

The Cougars’ games last weekend against Cordia at home and Bourbon County in Jackson were postponed. The Cordia game is a key district game and will be rescheduled.

The region’s top-rated team, the Knott Central Patriots, lived up to their ranking with a solid front-to-end victory over host LCC on January 29.

The 21-4 Patriots, led by sophomore All-State guard Cameron Justice’s game-high 25 points, used an 8-0 run to jump out to a 14-2 lead with 5:55 left in the first quarter over a mistake-prone LCCHS. The Cougars began to battle back, trailing 24-12 after the first quarter.

Sophomore Zane Blair’s lay-up with 6:05 left in the second quarter cut the Patriots’ lead to 26-20, but the Cougars would get no closer as KCCHS ran off 10 unanswered points and led LCCHS 44-29 at the half.

The mark of this edition of Cougars is that they don’t quit. By taking advantage of three consecutive KCC turnovers, LCC battled back to trail 44-35 on Josh Owens’s lay-up with 6:09 left in the third quarter. Cody Gregory’s short jumper with 4:22 left in the third kept LCCHS within striking distance at 46-37.

With Evan Hall dominating in the paint on both ends, the Patriots responded and the Cougars could get no closer, trailing 55-43 heading into the final quarter.