By IVY BRASHEAR
Institute for Rural Journalism and Community Issues 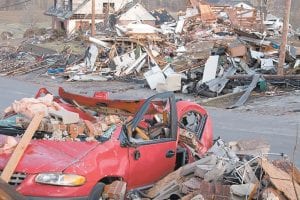 The photo above shows all that was left of the block that included the home of Licking Valley Courier publisher Earl Kinner. Below, a West Liberty funeral home lost the roof to its chapel during the tornado. (Photos by Lonnie Webster, special to The Mountain Eagle.)

How do you keep publishing your weekly newspaper when a tornado has blown away the office? You find a way, and some new ways, because your community needs it.

The staff of the Licking Valley Courier was out of the office when a tornado roared through West Liberty on March 2, destroying the entire downtown. “Our office was below Main Street behind City Hall,” reporter Miranda Cantrell said. “It’s pretty much destroyed.”

The paper published a day late the week after the storm, but even that wasn’t easy. With no office, stories were written in reporters’ homes, and downtown business people had to be tracked down at new locations.

Cantrell said no one started covering any stories until three days after the storm. “I felt like I should have been writing about it – but everybody was in sort of a state of shock. Nobody could really believe it, or could really even talk about it.” 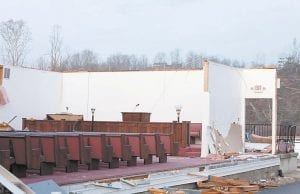 First, Cantrell was a community member, helping at a shelter set up close to her home. “Finally, I just decided I was going to start working,” she said. She established a Facebook page for the newspaper, its first online presence, to keep the community updated about business relocations, fundraisers, donations and emergency information.

“I don’t think there was ever any question that the paper was going to go on; we just didn’t yet know how we were going to go about it,” she said.

Local radio station engineer Paul Lyons said he drove through downtown about 10 minutes after the tornado, and it looked like a “war zone.” The next day, he and operations manager Steven Lewis and his friend Nate Lewis talked their way through the police blockade of the city and found their building had sustained only minimal damage.

Most of the equipment was still intact, so they restarted their automated programming computer, which runs music and commercials, and had WQXX and WLKS back on the air within 20 hours of the tornado.

Lyons said he’s slept an average of three to four hours a night since the stations got back on the air, and “pulled a couple of all-nighters” trying to keep them on, because of technical difficulties related to the storm. “We’re hanging by a thread, but we’re hanging and that’s all that matters right now,” he said.

The dual radio station is primarily an entertainment outlet, broadcasting country on FM and rock oldies on AM, but after the storm, its duties suddenly included providing news updates to the community because all other forms of communication were cut off.

“There was no cell phone service, no phones, but they still had radios and that’s where a lot of people got their information,” Lyons said. “We felt really good about our ability to help the community.”

In a small town like West Liberty, local news media play an important role in everyday life. Cantrell and Lyons said returning the stations and newspaper to somewhat normal operation was a small way to give the community a sense of normalcy.

When the Licking Valley Courier published its tornado-delayed edition on March 9, local leaders called it a sign that the community would continue.

The Courier is a “ big part of the fabric of the local community,” and even though the tornado edition was smaller than usual, it was a “big relief in people’s minds,” and gave confidence to the community, Commercial Bank CEO Hank Allen said. “It didn’t matter what was in it,” Allen said. “It was still alive and still living and breathing, and it gave the community hope that we could recover.”

Allen said the newspaper and local radio were “critical” in the days after the storm. Logistics for businesses were difficult and communication was non-existent, and the bank needed to communicate with its customers, as did many other businesses that regularly advertised in both media.

After four meetings in the two days after the tornado, the bank took “unprecedented step,” he said, running ads on Lexington television stations and regional radio stations and newspapers. He said it had never bought advertising from a non-local station or paper.

“The importance of the local newspaper was really clear then,” he said. “It really sinks in in a big way.” He said the community is blessed to have a local radio station and newspaper that provides a sense of security and stability.

After so much had been destroyed, Cantrell said, the paper is something familiar to the people of Morgan County: “We had a lot of people before we went to press that first time say, ‘It would make us feel a lot better if we still had that part of the community.’ They would probably be really disappointed if we couldn’t get the paper out to them.”

It has not been an easy year for Courier owner Earl Kinner, 73. His wife died last summer, and the tornado destroyed his home as he took refuge in the basement. He was forced to live in a Red Cross shelter for a day. But still he felt it was so important to keep publishing that he hand-wrote a story for the tornado edition.

He had no way to contact anyone because landline, cell phone and Internet services were down, so he mostly collected information from television reports, he said. “My thinking was if we get something out, it will bring some sort of normalcy and do some good,” Kinner said. “We can’t quit.”

The Kinner family has owned the 101- year- old Courier for more than 60 years, and he said reporting is “just in your blood, and a matter of pride.” That shows most in times of crisis, of which the paper has seen its fair share. Its office burned to the ground in 1985, but the paper published the next day.

“All I know how to do is get out a little country newspaper,” Kinner said.

The paper’s staff was able to salvage the computer with its subscriber list and all its bound volumes of old papers, which are being stored in the public library. Kinner and his son Greg, whose home was also destroyed, are living with his son’s sister-in-law. Kinner set up the computer in a closet and is working from there.

Kinner said he hopes to locate a mobile office on the destroyed building’s foundation until more permanent plans can be made. That’s when, he said, they can “get back to being a good old country newspaper.”

The next issue, dated March 15, contained a front-page notice to the readers from Kinner, asking for their patience as the paper replaces equipment and resumes normal operation.

“With no central office to work from, staff members and news and production staff isolated in several locations and unable to communicate except sporadically, it will be a small miracle if this paper makes it to press, and almost certainly, it will be late,” he wrote. It was late by one day.