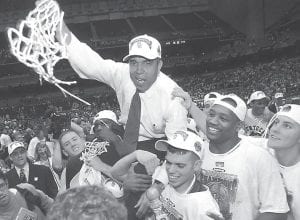 Tubby Smith and his UK players celebrated winning a national title in 1998. A documentary — “Out of The Blue” — will air Christmas and then be available on DVD. (Vicky Graff Photo)

Once the student section started calling him “Terry Touchdown” in high school, quarterback Terry Wilson was all-in with the nickname.

“I was balling out and the name just stuck. I thought it was a good nickname, too. So did my team- mates. They called me that and teased me about it. It just stuck,” said Wilson.

Kentucky fans would be more than willing to use the same nickname — or Touchdown Terry — the next three years. He recently decided to play for Kentucky and turned down Florida, Nebraska, Baylor, Mississippi and others after throwing for 2,113 yards and 26 touchdowns and running for 518 yards and five more scores at Garden City (Kansas) Community College.

The 6-3, 195-pound Wilson graduated from high school a semester early to enroll at Oregon in 2016, but redshirted his freshman season before transferring to Garden City. He threw for 5,262 yards and 49 touchdowns his final two years of high school in Oklahoma City and also ran for 709 yards and 11 scores as a senior. He was ranked as the second-best prospect in Oklahoma his senior year.

Even though he was at Oregon just one year, his teammates called him “Touch” — and he was fine with that, too.

“It’s just nice to know people think that much of me. It’s an honor to get a nickname like that,” Wilson said.

He became a recruiting priority for Kentucky after Georgia fourstar quarterback Jarren Williams pulled out of his commitment to UK for a second time. He made his official visit to UK Dec. 8-10 and said he bonded with coaches “and dudes on the team” that he really liked.

“There was a great vibe between us,” Wilson said. “That’s where it started with me coming to Kentucky. Getting the opportunity to play with guys on this team was a big thing. It doesn’t get any better than playing in the SEC, so that really caught my interest.”

Not having a starting quarterback returning was an “eyeopener” for Wilson also. He will be competing with senior Drew Barker, sophomore Gunner Hoak, and freshmen Danny Clark and Walker Wood for the No. 1 job if no one transfers or changes positions.

“I want to go in and do big things and help Kentucky get to the next level,” Johnson said. “I really didn’t know that much about Kentucky football. I knew more about Kentucky basketball. But when I watched the football team this year, they just had a few close games they lost. They were that close to winning a lot more games. I saw them progress.”

He liked Kentucky’s facilities. But he was not looking at “flashy stuff” to pick where he wanted to play. He had the glamour and glitz at Oregon. He was looking for the best fit with the best players around him.

“You have got to have players to win games,” Wilson said. “What I sensed is that Kentucky is ready to go. They are so close. I want to be that factor in helping them get to that promised land.”

He enjoyed being around running back Benny Snell, receivers Dorian Baker and Lynn Bowden, and several offensive linemen. He sensed they were “all about business” and ready to win a lot more.

“You can just see they are hungry and ready to do great things just like I am,” Wilson said.

Coincidence or not, two linemen — 300-pound defensive tackle Jerquavion Mahone and three-star offensive guard Kenneth Horsey — committed to UK within 48 hours of Wilson’s commitment. Wilson’s commitment put some buzz back in UK football that the Cats needed after losing to Georgia and Louisville to end the season.

Wilson said UK’s talent was a “big eye-catcher” to him when he watched the team’s bowl practice.

“There are some wideouts that can flat go. Some defensive guys can really play, too,” Wilson said. “It was really an eye-opener to have a chance to come in and play with those guys. They are good.”

While he can run, he’s not a runner. He calls himself a “pass first” quarterback who likes to stay in the pocket.

“But if it gets iffy in the pocket and guys are in my face, my speed helps me get out of those problems,” he said. “That’s a good asset on my game that I can do. That’s what coaches like about my game. I can throw the ball pretty well. Everybody wants to get caught up in that dual-threat quarterback stuff and think of somebody like Michael Vick who just squirts out of the pocket and runs. But I am really just an athlete playing quarterback that can throw and just happens to very shifty and fast. I feel like a lot gets lost in calling me a dual-threat guy.”

Wilson has not been timed in the 40-yard dash since running it in 4.5 seconds as a high school junior. He knows he’s faster now because of the training he’s done in the weight room and on the field.

“You have to deliver a blow. Sometimes you sit in the pocket and you have got to take a hit to make a play, especially if it is a critical down,” Wilson said. “You’ve got to take that shot for your team. You just have to build your body up in the weight room so you can take those shots. But when you get a chance to take your shot, you do that, too. That’s the biggest part of football — being able to take a hit but also deliver a hit. I can do both.”

The documentary on UK’s 1998 national championship season — “Out of The Blue” — will air on WKYT (Lexington) and WYMT (Hazard) at 4 p.m. Christmas Day and EYMT in Hazard at 7 p.m.

Former UK player Cameron Mills worked with Filthy Rags Media, Eppic Films and WKYT-TV again just as he did on the documentary on the 1996 national title team. Mills was on both teams.

The 1997-98 team lost four games — and three of them were in Rupp Arena. The last one was to Mississippi Feb. 14 and led to one of the best remembered calls to a postgame radio show where a caller said, “I am not giving up on this 22-4 team.”

Mills remembers Kentucky being called the worst 22-4 team in the country.

Mills said the Ole Miss loss led to the start of 6 a.m. practices and that the players “revolted” at the Final Four when coach Tubby Smith wanted to stop those early morning workouts.

“We didn’t want to stop because we had not lost after we started doing them,” Mills said.

He recalled how Allen Edwards lost his mother not long before the SEC Tournament and the severe ankle sprain Jeff Sheppard, who became the Final Four MVP, had in the SEC tourney.

“They were both suffering big-time in the SEC Tournament,” Mills said. “How you play in the SEC is how you play in the NCAA most of the time. We had started the year ranked ninth and then lost our first game to Arizona and dropped to 12th or 13th. Who would have thought the team that lost to a Louisville team that had a losing record — and lost to them in Rupp Arena — would win the NCAA?”

Maci Morris’s solid 3-point shooting has been one of the best parts of Kentucky’s pre-conference play but coach Matthew Mitchell says it is no accident she’s been so good. She’s averaging over 15 points per game and leads the team in 3-point goals.

“She sets a heck of an example, not only of getting in the gym but the quality of her work, so this is not just something that’s happening for her,” Mitchell said. “It’s not the stars have aligned just right.

Quote of the Week: “Kentucky high school basketball is not what it used to be. Cal (John Calipari) is getting the best players he can. We’ve got to raise the standard of play here in the state to give more Kentucky players to be on the team (at UK),” former UK player Cameron Mills of Lexington on the lack on in-state players at UK.

Quote of the Week 2: “I love Coach Cal. He’s an early entry hall of famer and that’s only happened six times in the history of the game. So, to have a coach that’s inducted into the hall of fame, I have the utmost respect for him. It’s the best job in all of basketball at any level and I don’t think there will ever be another head coach to do a better job at the best job than Cal,” Virginia Tech coach Buzz Williams on John Calipari.