Key’s father, Donte, played linebacker at Kentucky in the 1990’s. Two former Frederick Douglass teammates, receiver Dekel Crowdus and offensive lineman Jager Burton, are true freshmen at UK this year. Dane Key was also at the UK-Florida game when the Cats won and was among the fans who stormed the field to celebrate.

Yet Donte Key says the college decision is about a lot of factors and not to read too much into anything about his son’s UK connections.

“I am a former player and Kentucky alumni. I like Kentucky football. My wife is also a graduate of Kentucky,” Donte Key said. “So yeah, we were going to celebrate beating Florida.”

Donte Key says how schools plan to incorporate his son into their offense was a major focus in recruiting for the Key family. 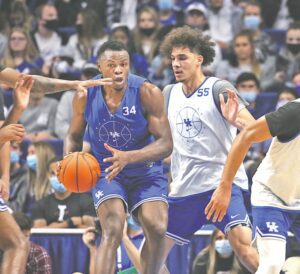 “All the schools broke down how they expected to use Dane. You have got to have a quarterback and offensive line to make the passing game go and you have got to have other receivers with you who can also be a top receiver,” Donte Key said. “If you just have one top receiver in the SEC, Big Ten or Pac-10, teams can cover that guy up and make you one-dimensional. One thing I asked the coaching staff is who they were bringing in to go with Dane.”

Kentucky is one of the finalists for Nashville receiver Barion Brown, one of the nation’s top receivers and a top 200 player nationally.

Donte Key also wanted to see how schools planned to teach Dane Key the “intricacies of playing receiver” at the next level.

“Skill will get you so far but if you are not good with the fundamentals of playing receiver you will not go to the top,” Donte Key said. “The technical game in college football is so important. That and a kid’s work ethic is what puts you over the top.”

Donte Key and his wife have tried to remain impartial during their son’s recruitment but says his son has met a lot of “really good people” during his recruiting journey.

“That makes it really difficult for a kid to make a choice. Coaches have been really good to him,” Donte Key said. “But this is also like the honeymoon phase. Once he gets to a school he has to buckle down and do the work because next year they are going to be looking for another Dane.”

“We just want him to go where he will be happy. Kentucky is a great school. No doubt about that,” Donte Key said. “Big Dog (Vince Marrow) is also hard to tell no. But if it is not the right opportunity for him, then it is not right. I just hope if he does not go to Kentucky that Kentucky fans are football fans who understand that and will not be crazy about him not going to Kentucky.” s

“Liam is a really good coach. He is very poised and that comes from being with the (Los Angeles) Rams and being in a lot of big-time games,” Marrow said. “He called a really good game for what he had to go against.

“He really was a great hire and has a great future. I am excited to go forward with him and win as many games as we can win.”

Coen got extra creative on UK’s first 75-yard scoring drive at Georgia and quarterback Will Levis said that was no surprise.

“When you are going against a defense like Georgia that is so skilled and disciplined you need things to work. You have got to be different. There will be plays in the future out of those packages that will look like that,” Levis said. “That was a drive we had to manufacture points and coach Coen did a good job putting that together and if the situation is appropriate, we will probably do it again.”

Marrow said the best help for Coen will come through recruiting, adding that it is much easier to sell skilled players on coming to UK now than it was a year ago when Wan’Dale Robinson transferred from Nebraska.

“We had to sell Liam to him, but we didn’t have a proven quarterback. When I was talking to Wan’Dale and most recruits I was going off Rams’ stuff (where Coen had coached) but most teams recruiting against us said that was just wishful thinking,” Marrow said.

“Once we got Will, you can see how he delivers the ball. That game at Georgia was the best he has played at quarterback against a defense like that. He was razor sharp. Now we can show that to recruits and we are going after some big-time receivers. That’s why I really love what Will is doing.” s

Kentucky fans stormed the field after the win over Florida at Kroger Field. One fan who enjoyed the win and postgame celebration was Oscar Tshiebwe, the West Virginia transfer who is expected to be John Calipari’s starting center this season.

“ That was great. We didn’t expect it, and that was my first football game, so I stayed for the whole game,” Tshiebwe said at UK’s Media Day. “We were playing Florida, who was a good team, and they always think they can take us and always beat us.

“It was amazing to beat them and celebrate.”

Tshiebwe didn’t have a lot to celebrate last season after he transferred and then had to sit out the second semester when UK was struggling to win games.

“Yes, it really hurts when I sit on the bench and I can’t help. I kept thinking that I cannot wait to come back so I can help this team, and I know I bring energy, so I helped motivate them as best I could,” Tshiebwe said.

“You have to be focused on one thing if you really want to be a champion and not focus on anything in the past. You have to keep moving forward and get better every day.”

Tshiebwe certainly made a favorable UK debut in the Blue-White Game last week. He scored 25 points and grabbed 21 rebounds to back up his belief that he can average 20 rebounds per game this season.

“Did you see how hard he plays, how fast he runs? How nibble his feet are for 255 (pounds)?” Kentucky coach John Calipari said. “He still needs to learn how to get balls with two hands. He’s been a one-handed rebounder and it has been hard for him. The good news is he’s got to go against Lance (Ware) and Lance gets to go against Oscar.” s

Kentucky had an immediate edge when point guard Sahvir Wheeler, who led the SEC in assists last season, decided he was transferring from Georgia. Wheeler has known UK assistant coach Jai Lucas since he was in middle school and used to attend camps run by John Lucas, Jai’s father.

“He’s the first person I call in the mornings to shoot and he’s the last person I call at night when I need something. He’s there and he’ll always be my guy,” Wheeler said. “We have always had a special connection and he made it a lot easier for me to come here.”

Wheeler was named to the preseason all-SEC first team — the only UK player picked — by league media. Lucas said that is a nice honor, but is more impressed by how Wheeler has improved since arriving at Kentucky. Coaches have been on him to reduce turnovers and he’s valuing the ball much better.

“He got better when he was at Georgia, but he has really taken another step up since he got here,” Lucas said. “I think with him being on a bigger platform, the nation will start to really see how good he is too.”

In last week’s Blue-White Game, Wheeler had 11 points and 10 assists. Calipari said after the game he thought Wheeler would be one of UK’s starters.

“This is what I love about the kid. I said, ‘This is what we need to do.’ He did it,” Calipari said. “He went right underneath the basket and threw the ball, an eight-footer. He did right.” s

Kentucky sophomore linebacker JJ Weaver was not surprised that so many UK fans traveled to Georgia to watch the Cats play No. 1 Georgia.

“ BBN has been supporting us since day one,” Weaver said. “It’s a blessing and makes us feel good. We celebrate with the fans all we can. I love to get the crowd going.”

Weaver knows that fan support makes an impact with recruits just like it did him when he picked UK.

“It started with my class. Just trust in Coach Stoops. Just trust the process,” Weaver said. “We have not always been a (good) football team. Now we are and a lot of in-state kids especially want to be part of it.

“A lot of kids ask me why I chose UK. To me, it felt like home. Kentucky was the best decision for me, and a lot of other guys are seeing that now.”

Weaver played high school football in Louisville but is originally from Florida. He says that also helps him relate to out-of-state recruits.

“I can relate to in-state or out-of-state recruits. I know out-of-state guys get homesick. I have them come to my house. UK is a home to us, and I want guys to be happy,” Weaver said.

Weaver can also share with recruits his feelings about Stoops.

“With what I have been going through with my father passing, Coach Stoops has helped me mentally. He set up people I needed to talk to. He’s just like another father figure to me,” Weaver said. s

Quote of the Week: “He is such a good kid and team guy. He’s really been a leader and brought a lot of energy. Kentucky is doing a great job featuring him with Liam Coen’s innovative play calling. There is definitely more to come, though. He is so dynamic. He gets the ball and you just hold your breath wondering what it will do,” trainer Chris Vaughn of Aspirations Fitness on UK receiver Wan’Dale Robinson, one of his clients.

Quote of the Week 2: “One that stands out to me would be Bryce Hopkins because he can do it all. He can finish down low, and he can take his man on the perimeter. He’s a bigger guy but he can dribble like a guard,” freshman TyTy Washington on freshman teammate Bryce Hopkins on the “Behind Kentucky Basketball” podcast.

Quote of the Week 3: “I’m there to score. Why not? Why in the world would anyone think that’s a controversy? They try to stop every play; we try to score every play. That’s how the game goes. That’s a stupid question, ‘Why did you try to score?’ Because I wanted to,” Kentucky coach Mark Stoops on his weekly radio show when a fan asked about the last-second timeout at Georgia before UK scored.