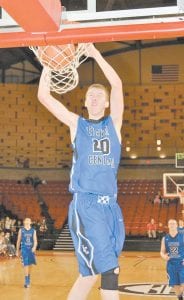 Perhaps the Letcher County Central Cougars surprised fans as well as themselves by how much they had improved the first month of the season. Playing mostly at home the first two weeks of the season, the Cougars ran off six straight wins.

A team’s flaws can more easily be exposed on the road and reality has to be faced. Playing on the road the past two weeks, LCC posted a 3-4 record against better competition in holiday tournaments in Berea and Wise, Va.

A huge test for the Cougars will be tomorrow night, January 3, at district rival Knott County Central. The Patriots, led by sophomore allstate guard Cameron Justice, ran off 11 straight season-opening victories before losing 57-55 Saturday against Henry Clay in the Republic Bank Holiday Classic at Lexington Catholic. Justice followed up that game with 62 points in a loss to Roger Bacon in Sunday’s consolation round. 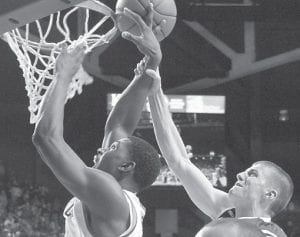 The Cougars raised their record to 9-4 after rallying from a twopoint half-time deficit to pull away from 1-5 Central in the second half for the victory in the third and final game of the Alpha Classic in Wise, Va.

In a fast paced opening quarter December 29, the Cougars used penetration and perimeter scoring to run out to a 21-19 first quarter advantage. Central then was able to take advantage of LCC turn-

Since scoring 20 or more points in four of his first five contests — including 20 against Duke — Poythress’ highest total was 16 against Samford five games ago. His rebounding has held steady, though Calipari believes he’s capable of grabbing more on the offensive end.

The coach attributes that weakness to Poythress’ lack of focus that has shown in his periodic failure to get back on defense or battle for rebounds. Calipari has also questioned his fitness.

Three weeks of “Camp Cal,” Calipari’s boot campstyle conditioning program, has improved the stamina of Kentucky players. But in working exclusively with Poythress as Calipari did with players as an NBA head coach, he hopes to address specific weaknesses and motivate him to play every game as well as he did against Duke.

“The question is, why is it your mentality that that is OK?” to jog back or stand up, Calipari said. “Where did you come up with that that it’s OK to be that way? If you are capable of doing this all the time, why would you not do it? That is the whole mentality that you have to change. It just takes time.”

Calipari said he saw progress after spending 38 minutes on Sunday and 27 Monday working with Poythress on areas such as body positioning and how and where he catches the ball. Sprints were used as a penalty to improve Poythress’ free throw shooting after he went 2-for-6 against the Cardinals.

That threat yielded quick results as Poythress made every free throw Monday and avoided his least favorite exercise. He was not available for interviews.

“He’s still not ready to play a game,” Calipari said. “We have time before our next game, and we’ll see where he goes.”

A month after having to work his way back into the Wildcats’ rotation following a four-game absence because of illness and a family matter back in Georgia, Harrow has started the past three games at point guard and scored 40 points over the past two. Besides improving his conditioning at Camp Cal, Harrow said he has evolved from laid-back jokester to being more serious about his role.

“Alex cares,” Harrow said. “He gets mad when coach talks to him, he gets mad when we talk to him. He’s just a different guy that doesn’t show much emotion. I was like that.

“But you can’t be out there just getting by. It’s not just Alex that has to change. We all do.”

Though the Wildcats’ record falls below what was expected from them at this point, Cauley-Stein has seen signs of improvement that he believes will serve Kentucky well in a short time. Every player has had to mature in his own way and at his own pace, and he’s confident that Poythress will take similar steps forward.

“We all have seen the beastly Alex, and we want him to come out of the shell that he’s in and play like he knows how to,” Cauley-Stein said. “It could be a slow process, but as a team, we’ve just got to stay with him and keep him positive.”