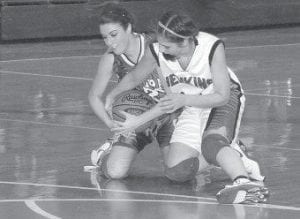 Haley Whitaker of Letcher Central and Kayla Stambaugh of Jenkins, both freshmen, try to get a grip on the ball during a game last week. (Photo by Chris Anderson)

The Letcher County Central Lady Cougars picked up a pair of wins on the road last week at Jenkins and Betsy Layne to raise their record to 11-3 and their modest winning streak to four straight.

The Lady Cougars remain on the road this week with visits to district foe June Buchanan tomorrow night, Jan. 15, and to Jackson Saturday night for a rematch with Breathitt County before returning home to host ever-dangerous Perry County Central on Monday, Jan. 19.

“This will be a tough week for us,” said coach Dickie Adams, “with these two road games against two teams that can play. And, we can’t be looking ahead to either Breathitt County or Perry County Central and overlook June Buchanan.”

June Buchanan, ranked sixth in the region this week, lost by 13 points to LCCHS back on Dec. 20 in the Lady Cougar Christmas Tournament. JBS is led by All-Region performer 6′ 1″ junior forward Maris Hovee.

“Hovee is a real nice player,” said coach Adams, “and one of the best players in our region. They played us tough here in our Christmas tournament and we expect this game to be another tough one.”

“Breathitt County is the two-time defending regional champion and is still the top ranked team in this region,” said coach Adams. “They’ve lost some games (9-4) this year to some very good teams out in the state. They lost (62-55) last Friday night at unbeaten Rowan County, who was ranked sixth in the state this week, but they recovered and squeezed past Leslie County last Saturday night so they still haven’t lost this season to any team from our region.”

Breathitt County held on to edge the host Lady Cougars 49-45 on Dec. 13 on a night when LCCHS couldn’t spit in the ocean from the deck of the Titanic — after it sank.

“We really laid an egg that night shooting the basketball,” admitted coach Adams. “We shot something like 19 percent on 14-of-71 from the floor. This Saturday night, we’re going to fix our field goal shooting but we’ll keep the rest of our first game plan the same. We outrebounded (49-39) them overall and by 28-4 on the offensive glass which allowed us 29 more shots than them. We won’t change anything but our shots — hopefully we’ll make more shots. Breathitt County’s tough to beat down there.”

It has been four years since Perry County Central last won a regional title after winning five straight from 2000 through 2004. Senior guard Cindy Kilburn and senior forward Ashley Neace are the only starters returning from last year’s 19-10 squad.

“It’s always tough to play Perry Central,” said coach Adams, “and while they may not be as strong as they usually are, they’re very good this year and we’ll have to play tough defense and make some shots and not turn the ball over so much to win.”

LCCHS, led by balanced scoring and sticky defensive pressure, jumped out in front of host Jenkins early to easily down the Lady Cavaliers last Friday night in Jenkins.

LCCHS won handily against a shorthanded Jenkins team earlier this season in the Lady Cougar Christmas Tournament on Dec. 18. Since then, Jenkins has a new coach in Whitesburg High graduate Chris Tolliver, and the Lady Cavs were at full strength this time.

Still, the addition of Nicole Revis and Kayla Stambaugh was not enough to close the final gap. LCCHS led 21-4 after the first quarter, 39-13 at the half and 58-26 after three quarters.

Freshman guard Haley Whitaker, who moved up to a starting role in this game, finished with six points but she chipped in with six assists, four steals and three rebounds while being charged with just two turnovers.

Tierra Baker, a 5′ 9″ senior forward, finished with six points, five rebounds and four steals. Baker is continuing to improve after a two-year lay-off and is really beginning to round into top form, according to coach Adams. “Tierra is becoming more involved as she continues to chip away at the rust she accumulated by not playing these past two years. She is developing a good relationship with her teammates and she’s improving each game.”

Coach Adams said his young team has really made improvements from the first of this year.

“We’re playing better as a group than we were earlier in this season. We’re understanding more of what we’re doing and that’s a good thing. We still need to improve our defense in the half-court with better communication. We’ve worked hard and the chemistry is getting better and better each game.”

Senior forward Sharaye Kincer scored 17 of her game-high 20 points in the second half as the visiting Lady Cougars pulled away in the final quarter to win their fourth straight at Betsy Layne on Jan. 12.

“It was a very ugly win for us and a step back in our development,” said coach Adams, “but a win nonetheless that we’ll take over a good team on a night when we did not play very well.”

With the shots not dropping, the Lady Cougars trailed Betsy Layne 12-9 after the first quarter. Freshman guard Erica Meade came off the bench and teamed with junior guard Brittany Sexton in the second quarter to push LCCHS to the front. Meade (9) and Sexton (6) combined for 15 of LCCHS’s 20 second-quarter points that gave the Lady Cougars a 29-22 lead at the break. Meade finished with 14 points and Sexton wound up with 18.

Kincer went to work in the paint in the third quarter as the Lady Cougars continued to struggle with making shots. Kincer scored 11 of her team’s 13 points and LCCHS hung on for a 42-37 margin after three quarters.

Free throws were critical down the stretch as LCCHS converted 9-of-14 with Sexton hitting six straight and Kincer a pair. As a team, LCCHS converted 18-of-26 from the charity line — including 12-of-18 in the critical second half.

“Both teams had lots of turnovers in a game that was very physical with both teams beating and banging,” said coach Adams. “We worked hard on defense but we struggled offensively because we turned the ball over way too much. We just didn’t finish plays. It was ugly but we won.”

Haley Whitaker finished with three points while Kelah Eldridge and Shannon Bays wound up with two points each.

Betsy Layne, one of the more talented and experienced teams in the 15th Region, was led by junior forward Megan Hamilton’s 16 points. Newcomer freshman guard Taylor Hott added 13 points for the 8-5 Lady ‘Cats.